Often referred to as the "Garden of New Zealand", the Taranaki region is located on the North Island’s rugged west coast.


The Taranaki region is dominated by Mt Taranaki, and offers a wide range of activities for those lucky enough to visit.

With everything from beautiful gardens to surf and snow adventures, it's even possible to snow ski and surf on the same afternoon!

With more than 300km of hiking and walking tracks, winter skiing and snowboarding, and heritage gardens, the region draws thousands of visitors year round. 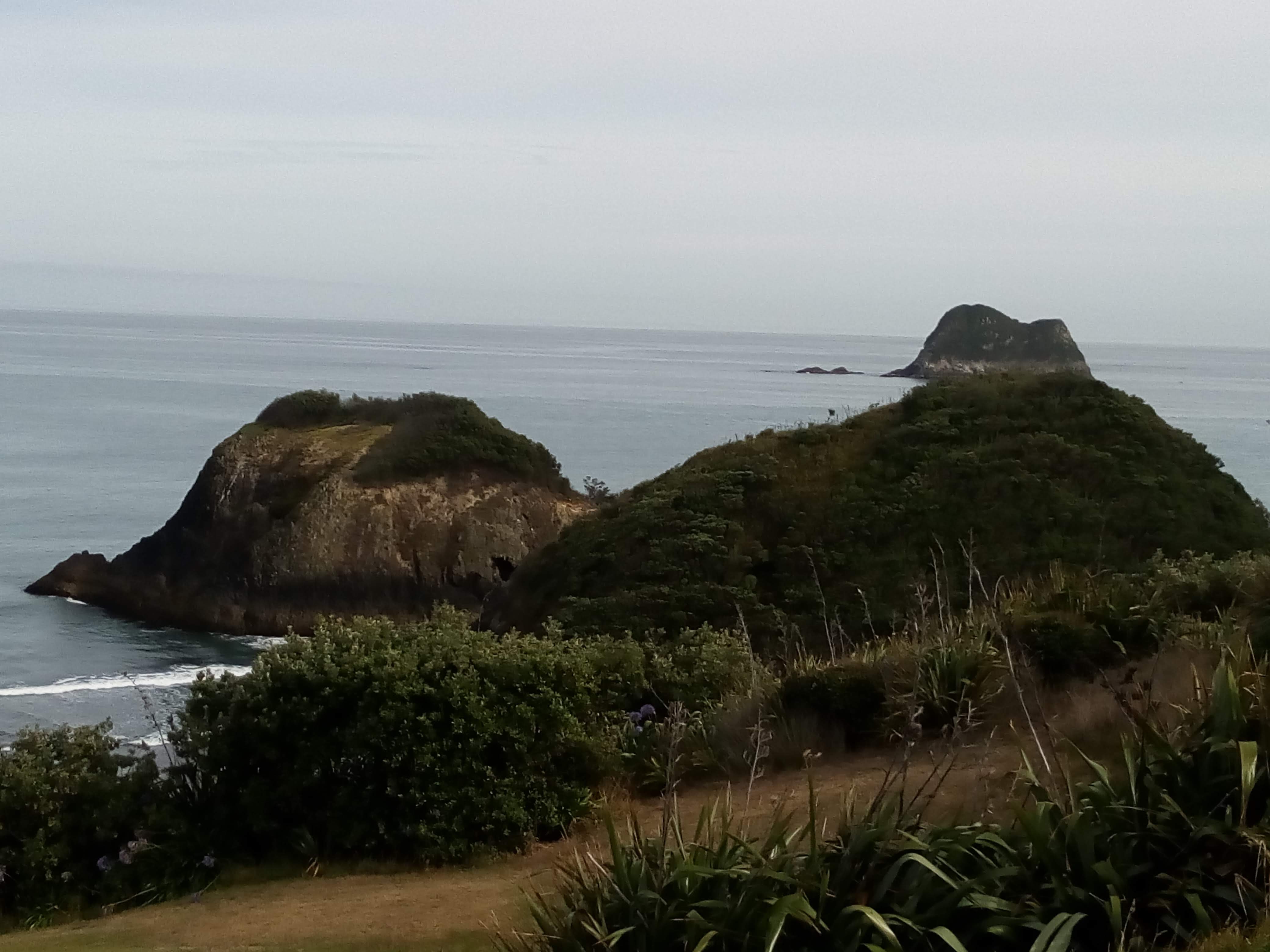 The largest settlement is New Plymouth, a bustling coastal city of over 50,000 people, which has the added attraction of being less than 30 minutes away from the slopes of Mt Taranaki.

Other significant towns are Waitara (in the north), Stratford (in the centre of the region) and Hawera to the south west.

Surfers are attracted by some of the best breaks in the country, which are accessed by the appropriately named Surf Highway 45, a scenic drive hugging the coast between New Plymouth and Hawera.

Also on this page

To help you find what you are looking for, just click on the links below, and you will be taken to the relevant topic on this page.

To return here, just click on your browser's back button. 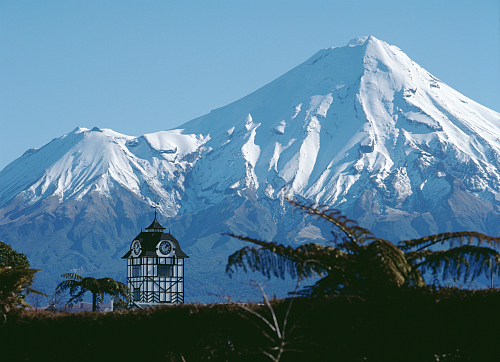 You can fly in and out of New Plymouth Airport from Auckland, Wellington and Christchurch.

Whether you are looking for a backpacker hostel of a five star luxury resort, the Taranaki region has something to suit all tastes and budgets.

Our best advice is to take your time and read reviews to see how the various motels rated with other visitors.

You can read reviews, search for accommodation, and even make your bookings by following the links below.

* to search a full range of accommodation in the Taranaki region, click here.

* to search for hotels in New Plymouth click here.

* to find accommodation in and around Waitara click here.

One Burgess Hill - a special place to stay

One of the best places to stay in New Plymouth is One Burgess Hill.

Located around 5-10 minutes drive from the middle of town, One Burgess Hill is a real gem.

As you drive in, a long sealed drive leads you under native ferns to the reception area. In the distance, rolling hills and the sound of a river promise something special.

After check in, a short drive down the hill takes you to your suite.

We chose a room on the second floor (suite 5), which had the bonus of an amazing view of the river and gorge. Inside the modern studio was complete with a kitchen (cook top, microwave and fridge), a large free standing bath overlooking the river, and a big, comfortable bed.

The hosts were warm and friendly and even arranged for a BBQ to be placed on the lawn near our studio. We spent two nights dining on the large outdoor table overlooking the river.

Sleep came easy with the sound of the river helping us to drift off for a great nights sleep, ready for the new day.

One Burgess Hill could be a 100 miles from anywhere, such is the feeling of peace and quiet. No noisy highways to deal with here, yet only a short drive to the attractions of New Plymouth.

If you are in the New Plymouth area, take the time to check out One Burgess Hill (and the pictures below).

We know you won't be disappointed.

You can make your bookings here. 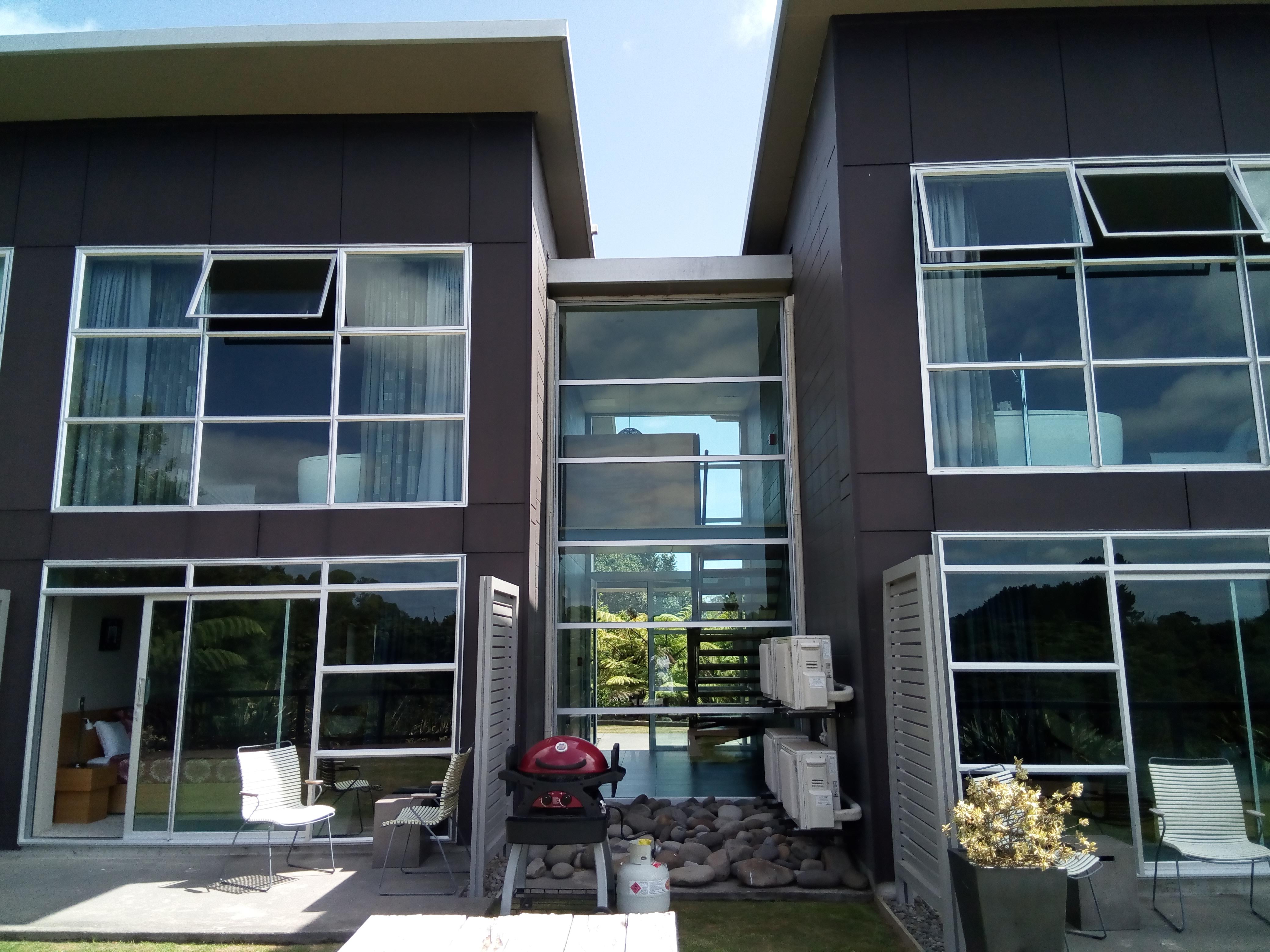 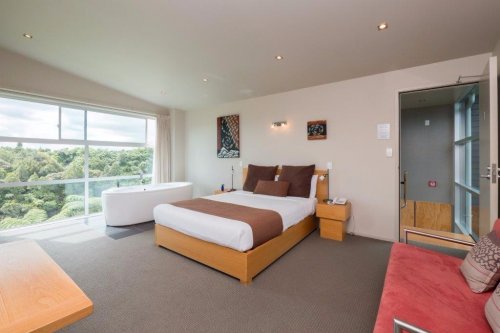 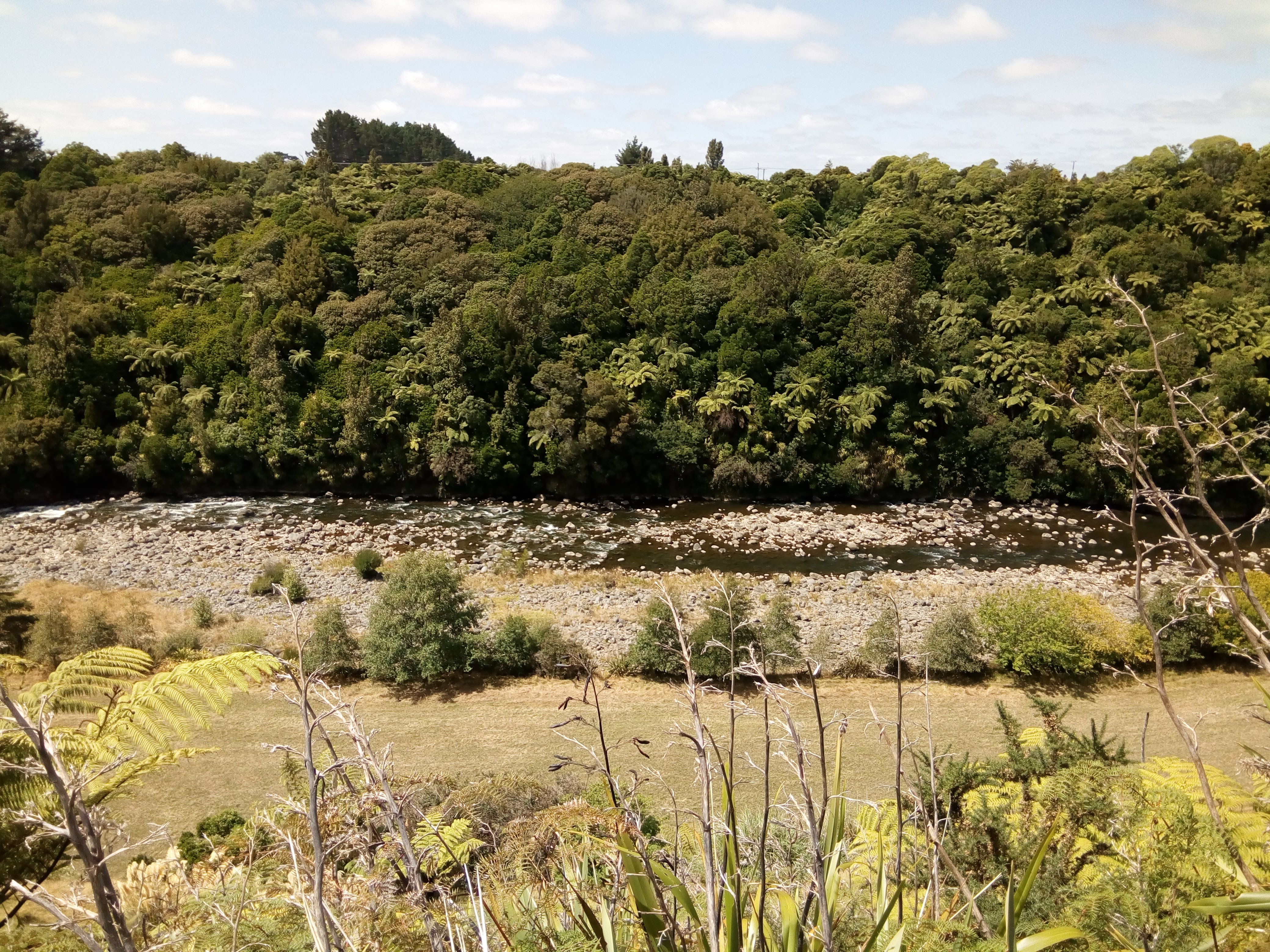 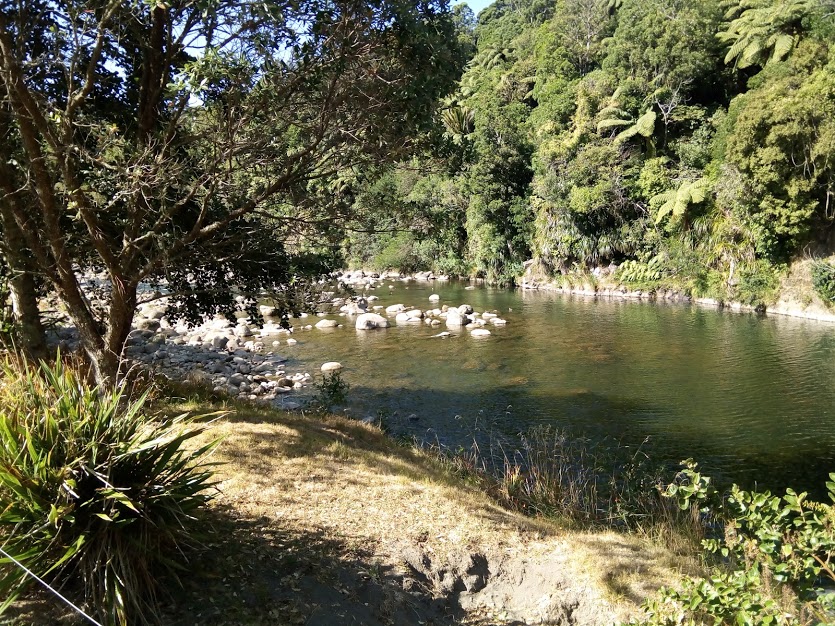 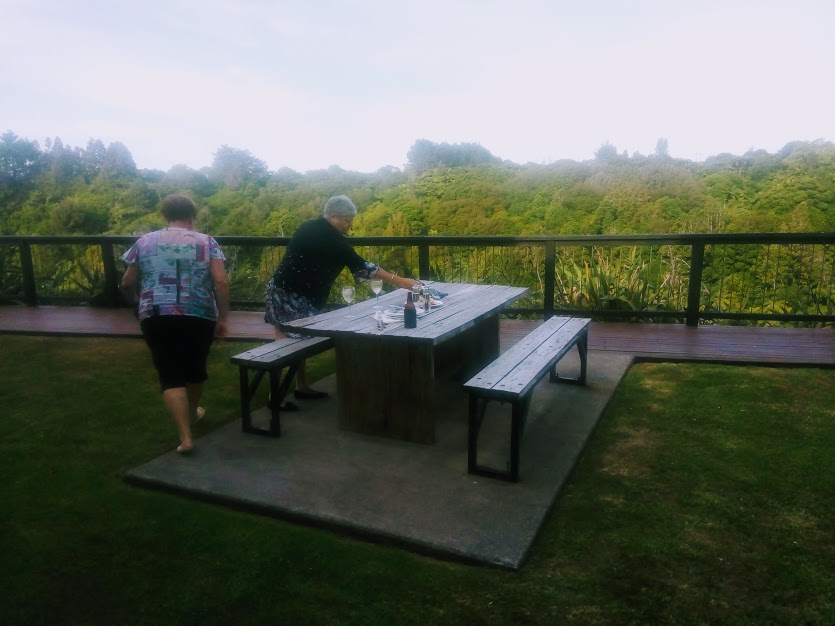 Pak N Save often have live mussels for sale. They are displayed in a tank with water pumped through. Just scoop up as many as you like! At the time of writing they were selling for around NZ$4.50 per kilo!

Then Google a recipe (cooked in white wine with garlic is a favorite of ours), cook them up, and enjoy with some crusty bread and a local beer or wine.

The local supermarkets also have a great range of wine and beer.

The region is historically significant. The town of Waitara was the site of the New Zealand land wars between the Maori people and Pakeha (European settlers), whilst in Parihaka, a non violent movement developed opposing the colonisation and confiscation of land from Maori.

Four Maori tribes originally settled in the Taranaki region, and it was one of the first areas inhabited in New Zealand. The Te Atiawa, Ngati Tama, Ngati Maru, and Ngati Mutunga were among the first to call the region home, however in the early 1800s, tribes from the Waikato region threatened to invade the Taranaki, forcing an exodus of the original tribes. 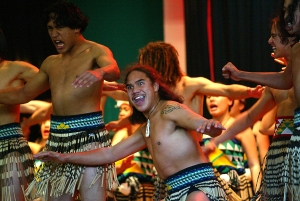 British settlers first came to the region in 1841, and started to buy large parcels of land. When the Maori people returned to the region, they took exception to the sales, thus beginning the New Zealand land wars. The first shots were fired in 1859 in Waitara. For the Maori people, Mt Taranaki has great spiritual importance.

Taranaki means the "Gliding Peak". And according to legend, Taranaki once lived with the three other great volcanoes, Ruapehu, Ngauruhoe and Tongariro. But Taranaki was exiled when he fell in love with Tongariro's wife Pihanga (another volcano). Taranaki moved westwards and as he did, his tears carved the Whanganui River. Legend has it that clouds cover his tears to this day.

The Parihaka Peace Festival, held in January annually, recognizes the peaceful 1860s Maori resistance against colonisation by the British. The festival pays tribute to two prophets, Te Whiti and Tohu, who actively encouraged their people to peacefully object to the confiscation of land. 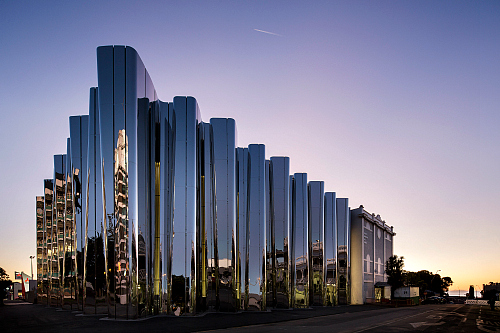 These days, the festival brings together a wide range of musicians from regae, soul and mainstream genres, together with a range of events promoting peace and understanding.

Throughout the Taranaki region you will find the remains of historic Maori fortified villages (known as pa) which reveal much about the region's history and Maori culture.

One of New Zealand's best museums, Puke Ariki, sits on the waterfront at New Plymouth. This award winning site houses over six thousand pieces of taonga (treasures) and provides a wonderful chronology of the region's history.

The Len Lye Centre showcases the life and works of the renowned New Zealand sculptor, artist, photographer and filmmaker, in a dramatically styled building located in the city centre.

If you have the chance, take a drive along Surf Highway 45. Apart from stunning scenery, the highway will take you past several historic pa and battle sites where you can learn more about the rich history of the Taranaki region.

Taranaki's beautiful peak towers over the region with a commanding aura, and is New Zealand's most accessible, and most frequently climbed peak. 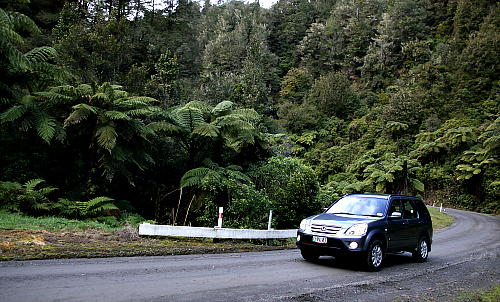 Make sure to take your camera with you as you will be taking shot after shot.

The mountain's rugged slopes are home to a wide variety of New Zealand's unique flora and fauna.

On Taranaki's southern side, the omminously named Goblin Forest is a thick rainforest which thrives in a near perfect climate where high rainfall and mild temperatures encourage growth. 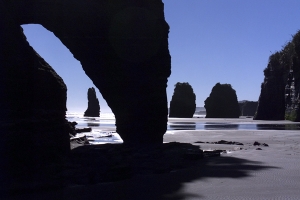 A walk brings you face to face with ferns, mosses, and ancient trees. A very mystical place.

Another great drive in the region is the Forgotten World Highway . As New Zealand's first heritage trail, the highway follows historical Maori trade routes, and takes you through lush forests, past beautiful mountains, and historic sites.

For garden lovers, the region is home to many significant gardens. With an ideal climate, Rhododendrums thrive, and the annual Rhododendrum and Flower festival draws people from around the world.

The region’s combination of coast and mountain provides the perfect landscape for a wide range of outdoor activities. 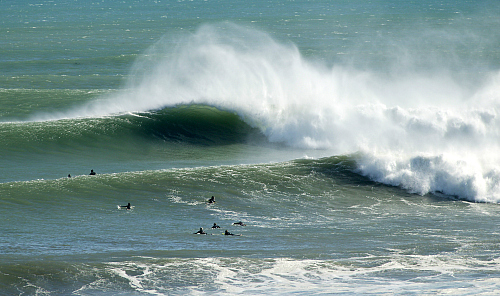 Surf conditions on the west coast are legendary with waves the equal of most places on earth. Surfers are drawn to the region by consistent breaks and the variety provided by sandy beaches and rocky outcrops. And tourists come for the wonderful scenery provided by Surf Highway 45.

Mt Taranaki is located in Egmont National Park , home to a wide range of alpine treks and walks. 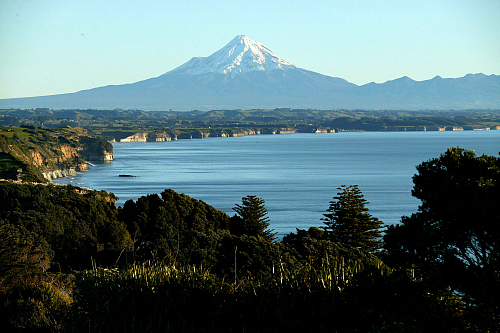 Walks range from easy 10 minute strolls, such as the Kamahi track, to three day treks such as the Poukai circuit, which takes walkers around the mountain. The Poukai is one of the more popular walks in the region, and gives walkers stunning views of the coastline.

And professional guides are on hand to take snow and ice climbers to the peak of Mt Taranaki.

And in the winter months, skiers and snowboarders are well catered for with the Manganui ski fields.

There's lots More To Do In The Taranaki Region

* The Forgotten World Highway runs for 155 kilometres from Stratford to Taumarunui and climbs over several steep saddles. 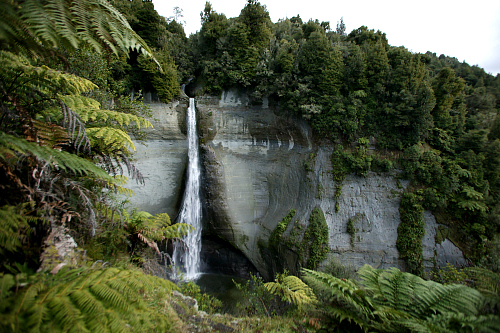 Now completely sealed, the drive takes around 3 hours. Highlights are the 180 metre long Moki road tunnel, built in 1936, and the 74 metre high Mt Damper Falls (an easy 20 minute walk from the road).

* The 7 kilometre long Coastal Walkway in New Plymouth takes you from Port Taranaki via the city centre to Lake Rotomanu and the mouth of the Waiwhakaiho River. The walkway also passes Paritutu Rock and Fitzroy Beach, and is popular with walkers, cyclists, rollerbladers and skateboarders.

* As mentioned earlier, Puke Ariki museum has one of New Zealand's best collections of Maori artefacts. Highlights include a unique Maori cloak made entirely of dogskin (!), and a collection of Maori carvings. 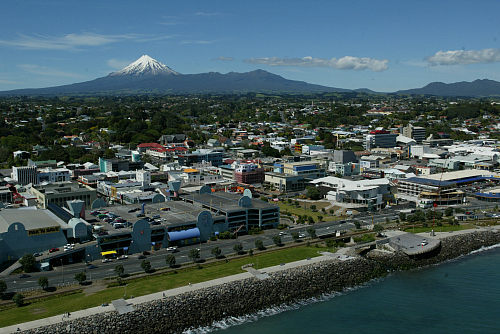 * Paritutu, a 154 metre high volcanic plug, and fortified pa site, offers great views over New Plymouth city and port. The climb can be hard and takes around 40 minutes, but the views make the climb worthwhile.

* Pukekura is one of New Zealand's finest public parks, and features a fern house, a central lake, and stunning views of Mt Taranaki. Parts of the film The Last Samurai were filmed in the park.

* Fancy a game of golf? With over 20 golf courses, the Taranaki has something to suit all skill levels. 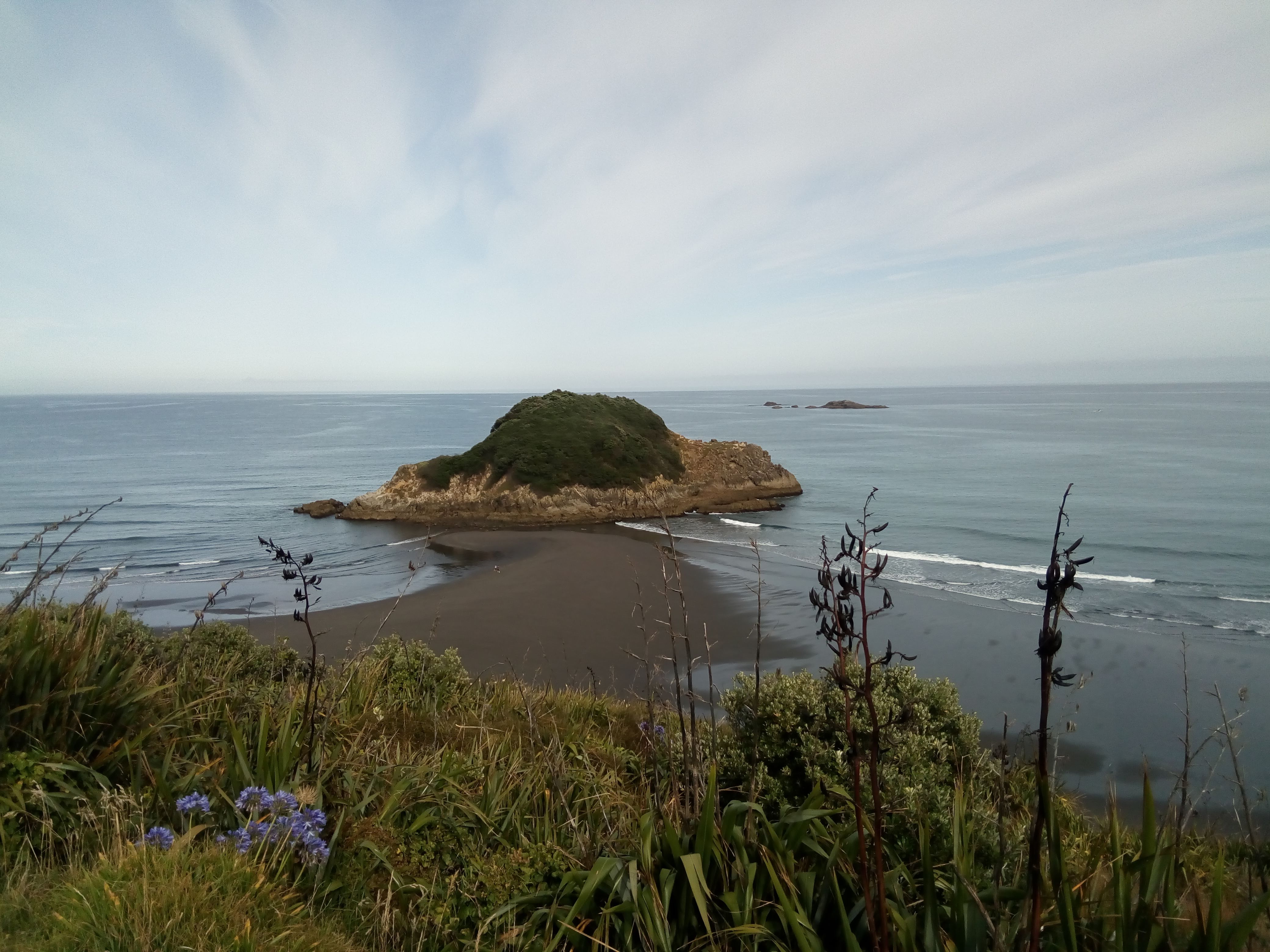 Interesting Facts About The Taranaki Region

* The region is often called the "garden of New Zealand".

* The Taranaki is home to 10 of New Zealand’s 31 gardens of national significance.

* "Ginger the cat" became the first feline alpinist to climb Mt Taranaki unaided in 1917 (were there other cats that had assistance??).

* Whangamomona, the central township on the Forgotten World Highway, declared itself a republic in 1989.

Our thanks to Rob Tucker for allowing us to use his wonderful photos on this page. 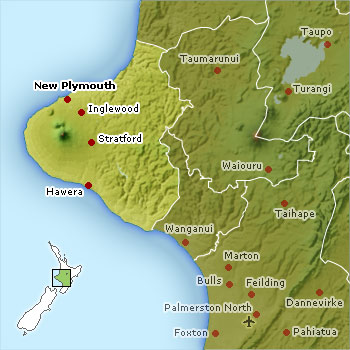