Sparsely populated, Southland New Zealand is famous for its native bird sanctuaries and an untouched natural environment. Around one quarter of Southland’s land area is protected as part of the Fiordland and Rakiura national parks, and conservation and sustainability projects are key regional activities. The Department of Conservation is heavily involved in these initiatives and their website has lots of useful information on the region.

Southland New Zealand's largest city is Invercargill, a laid-back country town of around 50,000 people, with a strong Scottish heritage (much like Dunedin). 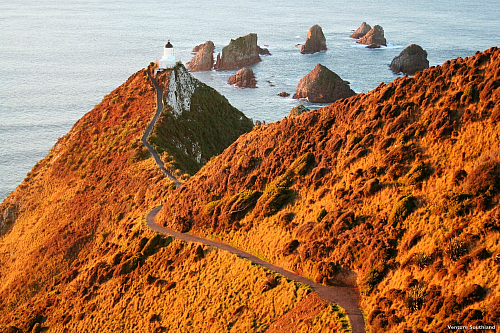 Invercargill is a stop-off point on the Southern Scenic route, offers visitors a taste of the legendary southern hospitality and is the perfect base from which to explore beautiful wild destinations like the Catlins coast and Curio Bay.

Bluff, a fishing port to the south of Invercargill, is home to the magnificent Bluff oyster, a traditional New Zealand delicacy harvested from the cold waters of the southern ocean. Southlanders celebrate the oyster season in May with the annual Bluff oyster and seafood festival.

Stewart Island is New Zealand’s third largest island and a haven for native bird life. It lies on the other side of Foveaux Strait, a ferry ride from Bluff. Rakiura National Park , covering almost 85 percent of Stewart Island, has fantastic coastal views and walking tracks, and some of New Zealand’s most endangered birds.

Southland sits at the very bottom of the South Island.

Bordered to the West by Fiordland, and to the north by the Southern Lakes, Central Otago and Coastal Otago, Southland also includes Stewart Island.

From Invercargill to Dunedin is around two and a half hours drive, also via SH1.

You can view a wide range of Invercargill accommodation HERE.

The traditional Maori people knew the region as Murihiku or "tail end of the land". Stewart Island was Te Punga o Te Waka a Maui or "anchor stone of Maui’s canoe". These names recall the story of how Aotearoa New Zealand was formed. 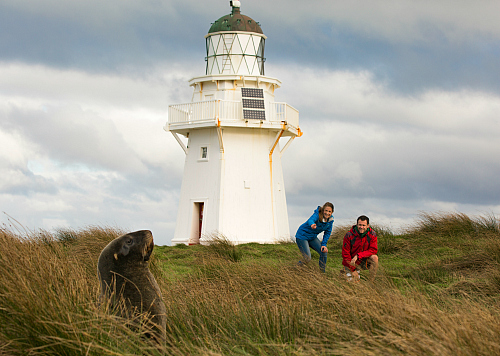 According to Maori folklore, the great Polynesian navigator Maui fished the North Island up from the ocean. Maui’s canoe, Te Waka a Maui (the South Island), was anchored by Stewart Island.

Before the arrival of European settlers the local Maori people were hunter gatherers. The cold climate made it impossible for them to grow kumara (sweet potato), so they relied on seals and the now extinct giant moa birds as their main food sources.

European sealers arrived in the 1790s, and were followed in the 1820s by whalers who established whaling stations. One of these, Riverton (around 38km from Invercargill), was one of New Zealand's first European settlements.

Southlanders are very protective of their environment, which is the subject of some innovative conservation initiatives. 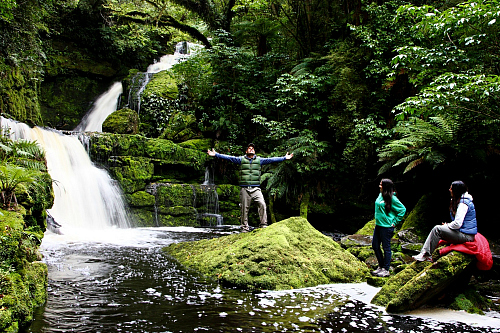 The Department of Conservation (DOC) are actively involved in the eradication of pests and in the establishment of breeding programmes for endangered birds inside the national parks. As a result, Ulva Island, a short water taxi ride from Stewart Island, is a predator free open sanctuary for many native New Zealand birds. Established in 1997, native flora and birds including South Island saddleback, mohua, rifleman and Stewart Island robin flourish.

Sustainable Tourism South promotes protection of the environment in the tourism sector. This regional initiative encourages Southland businesses to consider the natural environment and resources, while ensuring long-term economic and socio-cultural benefits.

The Lodge at Tikana, in Browns, a short drive from Invercargill, is involved in the sustainable tourism project and was the first South Island accommodation awarded Qualmark Enviro Gold status.

The region is famous for its untouched natural environment. Its protected national parks and marine reserves are home to a wide range of native birds, plants and marine life. 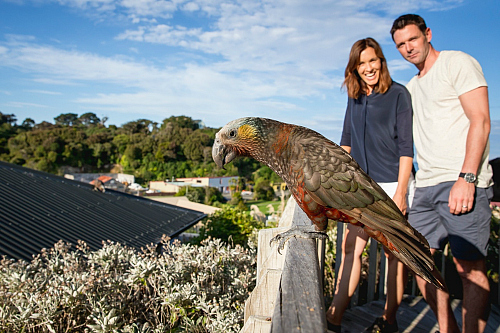 Stewart Island, home of Rakiura national park, is a haven for native birds such as the iconic kiwi, kereru (native wood pigeon), bellbird, tui and rare saddleback. About 20,000 kiwi live on Stewart island - the world’s largest kiwi habitat - offering the best opportunity of seeing kiwi in the wild.

Curio Bay, on the Catlins coast, has a 180-million-year-old fossilised forest. The petrified stumps, fallen trees and fern imprints are easily accessed at low tide, or can be viewed from a platform above. The bay is a nesting site for New Zealand's unique hoiho / yellow eyed penguin, and dolphins and seals often visit. 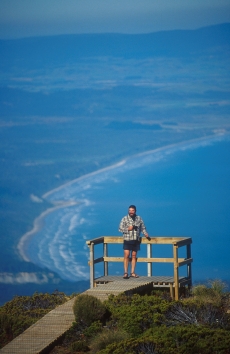 The region has many diverse hiking routes from short walks to multi-day treks.

Rakiura track on Stewart Island is a 36km circuit that takes about three days to walk. It follows the open coast, climbs over a 300m high forested ridge, and traverses the shores of Paterson Inlet.

Tuatapere Hump Ridge track is a three day trek along rugged coastline, through podocarp and beech forest, and past sandstone outcrops. Walkers can travel the track unguided or with a guide.

Southland’s 28 top fishing rivers and streams include some of New Zealand’s best trout fishing destinations. Mataura river, with the highest trout population and catch rates of any New Zealand river, is among the world’s best.

There Is Lots To Do In Southland New Zealand

Here are a few suggestions:

* Visit Bluff in May for the Bluff Oyster and Seafood Festival, and sample some of the finest seafood available anywhere.

* Country music fans flock to the township of Gore each year for the Gore Gold Guitar Awards. A celebration of New Zealand country music.

* Gore claim to be the Brown Trout fishing "world capital". That may be an exageration, but the rivers around Gore certainly have a plentiful supply. Try your luck. 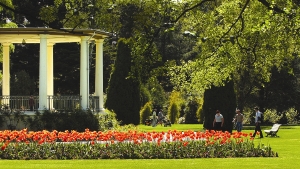 * Take a walk around central Invercargill to see many historically significant buildings, including The Water Tower, First Church, St Mary's Basilica, and the Provincial Chambers.

* Visit the beautiful Queens Park in Invercargill. This 80 hectare display includes a wide range of garden styles, a golf course, sporting fields, and a bird aviary.

* Take the 1 hour ferry ride from Bluff to Stewart Island, and spend a couple of days exploring Rakiura National Park. Although there are only a few hundred residents on the island, it has a reasonable range of accommodation and eateries. Go kiwi watching and visit the museum.

You can make your ferry bookings here:

* Explore the Catlins, which include many isolated bays and beaches. Visit Jacks Beach and Blowhole (55 metres deep), Purakauni Falls, and the tidal Cathedral Caves.

* Curio Bay is home to fossilized trees and stumps, the result of a huge volcanic eruption. Yellow eyed penguins also inhabit the bay, and can be seen late in the day as they return to their nests.

DID YOU KNOW - Southland New Zealand

* The region was home to speed legend Burt Munro, who once held the world land speed record.

* Anthony Hopkins portrayed Burt Munro in the movie The World’s Fastest Indian (if you haven't seen the movie, do yourself a favour and see it - great stuff) which was mostly shot in the region. 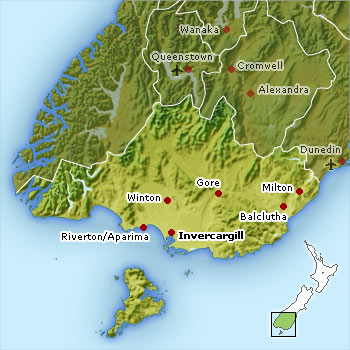