Dunedin Otago - on the South Island's south eastern coast, has a strong Scottish heritage, stunning architecture, and New Zealand's oldest university, and is a centre for arts and culture.


The stunning Dunedin Otago region is home to over 100,000 people and is a hub for education, with New Zealand's oldest university. 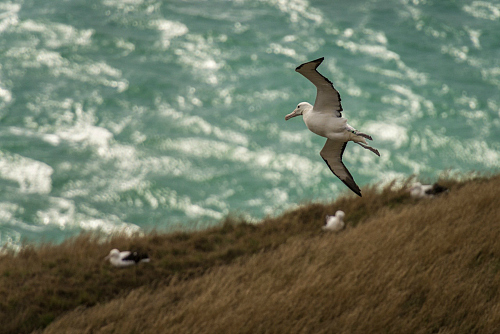 With a strong Scottish heritage, Dunedin is often referred to as the Edinburgh of the South, and has some beautiful Edwardian and Victorian architecture, including the well known Larnach Castle, and the Dunedin Railway Station.

The rugged coastline, dotted with pristine bays and beaches draws visitors from around the world, and the Dunedin Otago Peninsula is also home to colonies of rare birds and many unique species of wildlife, including the rare Yellow Eyed Penguin, the Royal Albatross, and sea lions.

There is so much to see and do in Dunedin that we thought we would save you some time, and give you our "Top Attractions".

Based on our customer reviews, and our own experiences, these are the "must do" activities if you are in Dunedin - Coastal Otago.

See the city highlights then the region’s famous wildlife!

If your time in Dunedin is limited, then this is the perfect tour for you.

Your morning will be spent visiting the city highlights like Larnach Castle, Dunedin Railway Station, Baldwin St (the world’s steepest residential street), and many other city highlights including some beautiful Georgian and Edwardian architecture. 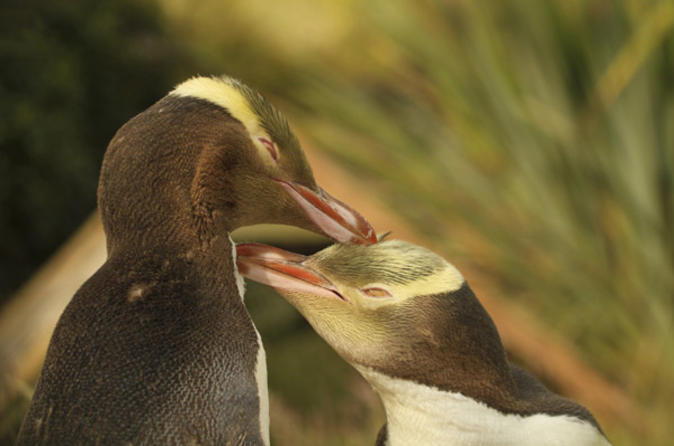 In the afternoon it’s all about the wildlife and the region’s amazing natural beauty.

Visit the habitat of the rare Yellow Eyed Penguin, on a one and a half hour guided tour amongst hides and their tunnels. There are around 90 steps on this part of your tour, so a reasonable level of fitness is required.

Then it’s off to Tairoa Head to see the nesting grounds of the Royal Albatross.

Look for them soaring overhead as your guide details the life cycle and history of these wonderful birds.

Then it’s time to enjoy the stunning coastal scenery as you return to Dunedin.

It’s a great day out. To learn more just click on the button below:

One of the region’s best attractions is the Taieri Gorge Railway. 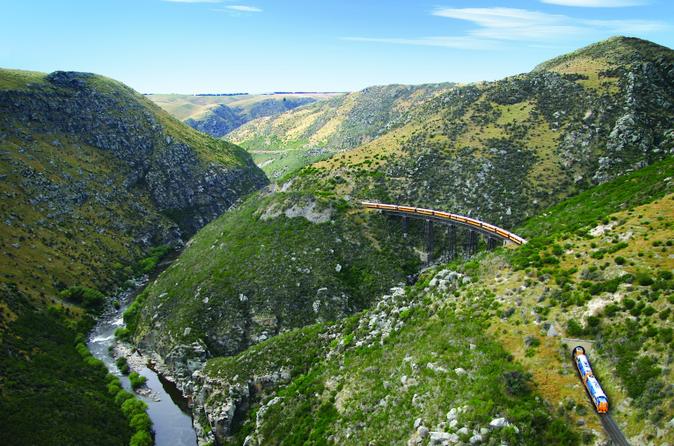 Departing from the Dunedin Railway Station, your train journey takes you through beautiful countryside to the Taieri Gorge, with some wonderful photo opportunities along the way.

Much of the countryside that you see is only able to be viewed from this train.

This fully narrated tour reveals the history of the region and the construction of the railway, and you really get an appreciation of how difficult it must have been for the construction workers.

Taieri Gorge Railway is an absolute “must” if you are visiting Dunedin and is highly recommended.

To read reviews and for further information just click on the button below:

See the sights on your half day city tour

After collection from your hotel, your experienced guide will show you the sights of this beautiful city. 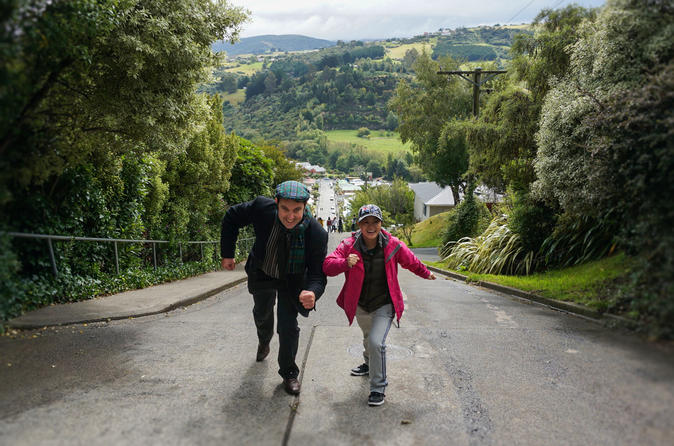 Make your way up to Signal Hill for stunning views out over Otago Harbour, and visit Baldwin Street, the steepest residential street in the world (it is steeeeep!).

Learn about the culture and history of Dunedin, including the influence of the traditional Maori people.

See the Otago Settler’s Museum and Speight’s Brewery, home to some of New Zealand’s most popular brews.

At the conclusion of your four hour tour, it’s back to the comfort of your motel.

Read reviews and see what others thought of this great tour by clicking on the button below:

Now this tour is something different. 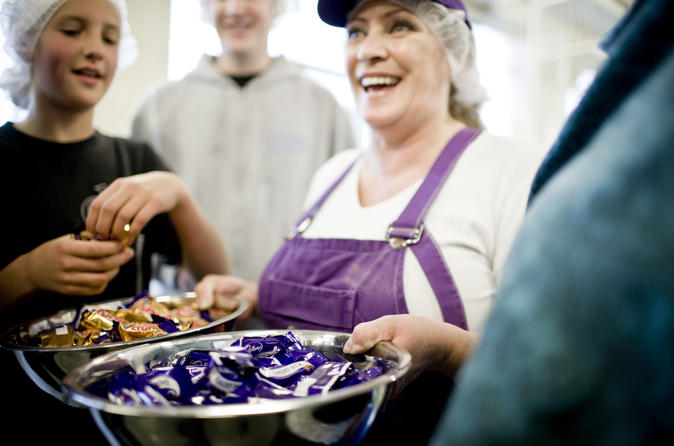 On your one hour guided tour of Cadbury World you’ll see your favorites being made, and learn about the history of this tempting treat.

You’ll even have the opportunity to try and make your own!

Join your guide in the Cadbury lab, where chocolate creations come to life. See how they are made, and even indulge as you create your own special treat.

After your tour, take some time to relax and buy one of their special hot chocolates.

Cadbury World is only a few minutes walk from the city centre, and is a must if you are in Dunedin.

Great fun for young and old.

Learn more by clicking on the button below:

The Otago Museum is not your average museum

With a region so rich in history, it’s always a treat to find a museum that does it justice. 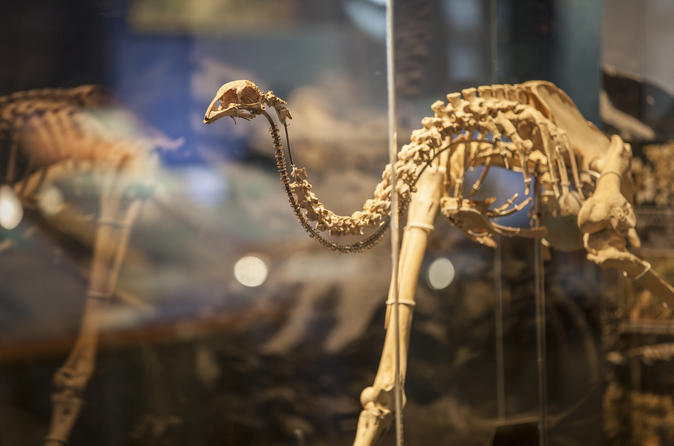 And the Otago Museum is just such a place. Your experienced guide takes you on a forty five minute tour of the museum, delving into the cultural and historical past of this wonderful district.

Learn about the traditional Maori people and their journeys to source food and pounamu (greenstone).

Hear about the long gone whaling and gold industries, and of the struggles of the pioneers to survive in what must have been a harsh environment.

And you will be amazed by the collection of skeletons of the extinct giant moa, the Flag Point plesiosaur, and the giant Haast’s Eagle.

Learn about the Royal Albatross and the region’s amazing penguins

This is a great value tour and fun for all ages.

Dunedin Otago - The Scotland of the South

The picturesque Dunedin and Coastal Otago region stretches between the Waitaki (in the north), and Clutha (in the south) rivers, and is located east of Central Otago . 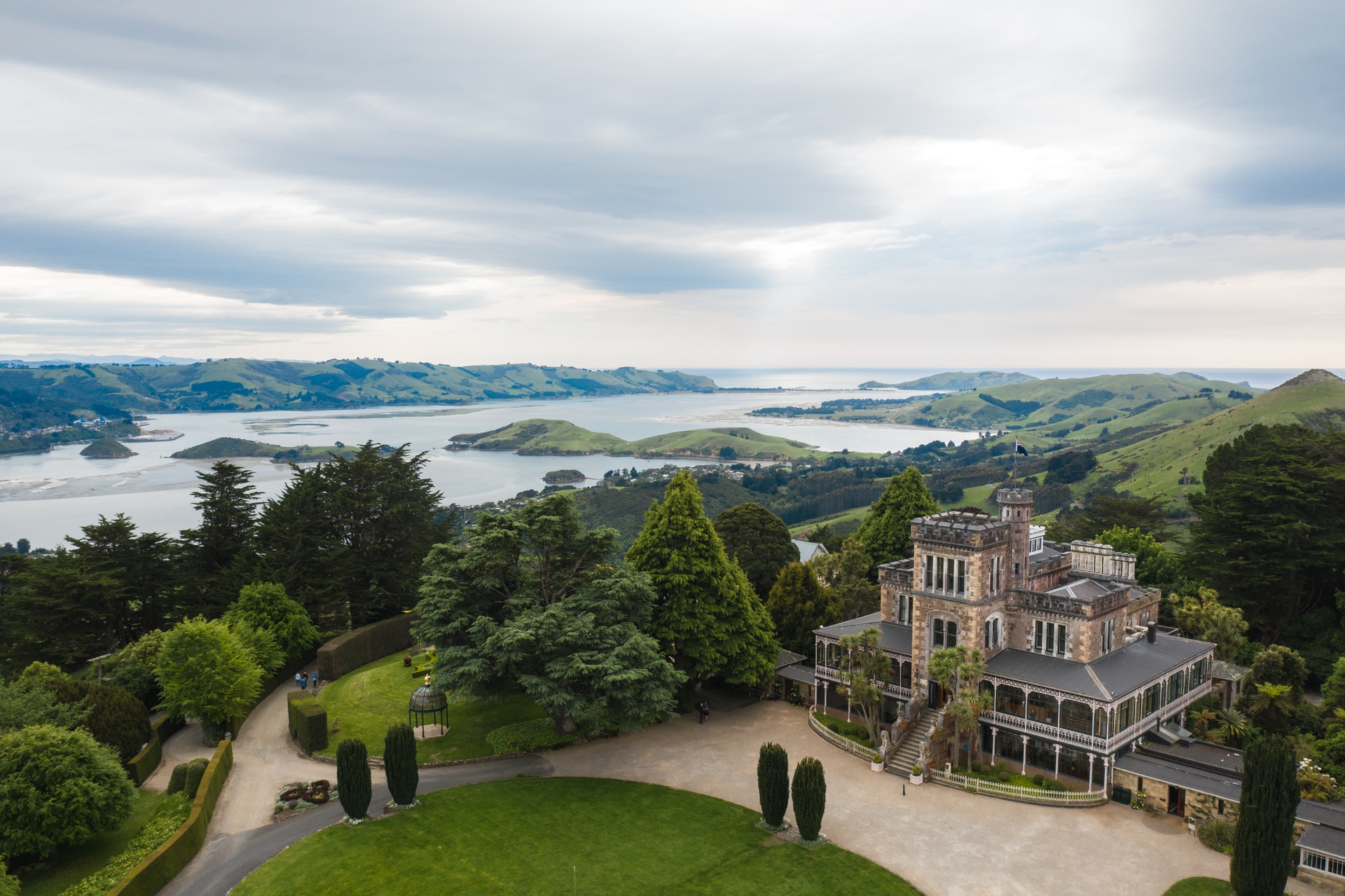 To the south sits Southland (naturally!), and to the north, Christchurch and Canterbury. Dunedin, the South Island's second largest city, is one of New Zealand's oldest, and has a rich Scottish heritage.

Located on the shores of a stunning harbour, Dunedin is a beautiful spot to base yourself in for a few days while you explore the region.

Dunedin is the hub of the region and is a bustling city with a strong sporting culture. Home to the Otago Highlanders rugby team (the 2015 Super Rugby champions) and scene of many epic international rugby battles between the New Zealand All Blacks and touring teams, the local rugby stadium gained a reputation as a feared venue, and became known as the "House of Pain". New Zealanders really love their rugby!

The Otago Peninsula is also a nature lover's paradise, and is home to an albatross colony at Taiaroa Head, rare yellow eyed penguins, New Zealand fur seals, and several species of dolphin. And near the coastal town of Oamaru, visitors can see a blue penguin colony.

Dunedin Otago has numerous wonderful walks and mountain biking tracks. For the energetic, popular activities include kayaking, fishing for trout on the Clutha river, catching a wave at St Clair, and visiting the unusual dome like boulder formations at Moeraki beach.

Find the best deal, compare prices, and read what other travelers have to say about hotels in Dunedin

The original Maori people named the area Otepoti, and first came to the region around 1100AD.

Dunedin city was planned in the early 1840s as a Scottish settlement. The first settlers arrived soon after and, following the discovery of gold in the 1860s, Dunedin developed into one of New Zealand's leading commercial centres. 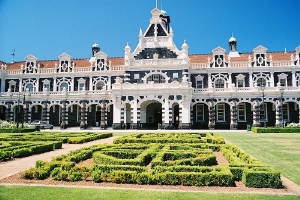 The famous Otago gold rush was like a magnet, and attracted many new residents, drawn by the promise of riches. Chinese, Italians, Germans, French, and Irish settlers poured into the region and contributed to the multi cultural feel of the region. Chinese cultural links are still very much in evidence.

Many of Dunedin's buildings date back to the gold rush era. First Church, University of Otago's clock tower, Larnach Castle and the Otago Boys High School were all constructed in the late 1800s, and the Dunedin railway station was completed in 1906.

The coastal town of Oamaru (north of Dunedin) is well known for its Edwardian and Victorian architecture, with whitestone being a popular material.

The Otago Peninsula has the only mainland albatross colony in the world, and is home to around 140 of these amazing birds. With a huge wingspan of up to 3 metres, albatross are capable of speeds in excess of 60 miles per hour (100 kilometres per hour).

Nature lovers are also drawn to the area by the chance to see the rarest penguin of them all, the yellow eyed or hoiho. 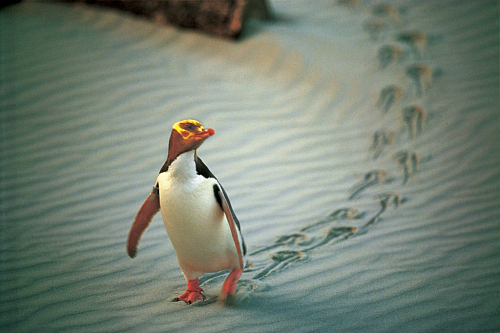 The University of Otago Marine Studies Centre houses various displays which showcase the region's underwater life, and at Oamaru you can observe a colony of blue penguins.

Many of the region's rare species survive because of breeding programs and protected habitats. Locals are very protective of their wildlife and environment and ensure that tours are supportive of their protection.

A protective fence gives the inhabitants of the Orokonui Eco sanctuary the perfect environment in which to thrive and survive.

There are also several eco friendly accommodation options in the region, such as Highland Peaks and Kaimata Retreat.

Dunedin has a deserved reputation as a centre for education, culture and art, and over the years has been home to a wide range of the countries most respected musicians, artists, poets and writers. 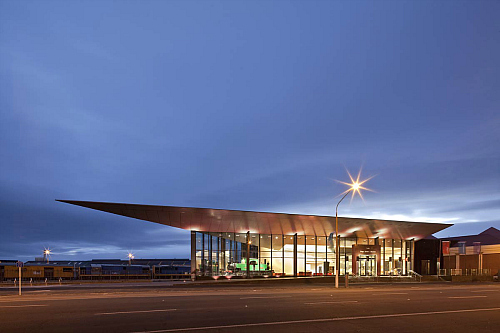 As mentioned earlier, Victorian and Edwardian architecture is the dominant theme. Many buildings have retained their structure and style, but have been "modernised" for alternate uses, such as the Dunedin railway station, which is now home to the Speight's brewery. And the beautiful Chinese gardens are a living link to the areas Chinese culture.

The Otago Settlers' museum is a great place to gain an understanding of early life in the region and of the influence of the Scottish settlers. And the famous Taieri Gorge railway is the perfect way to experience the  rugged Otago landscape 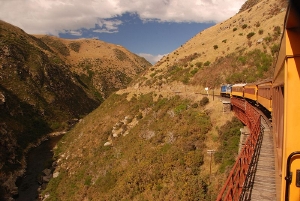 Covering 77 kilometres, the trip takes you through the Taieri River Gorge, over viaducts and through 100 year old tunnels. Well worth a trip.

The historic Dunedin Public Art Gallery has been operating since 1884, and houses a comprehensive collection of art from around the world. Exhibitions are also held at the University of Otago and the Otago Museum, and the region has a vibrant music and theatre culture.

Dunedin is also home to the New Zealand Sports Hall of Fame.

Dunedin Otago - DID YOU KNOW

* Fort Taiaroa was established more than 100 years ago as protection from a possible Russian invasion! An albatross colony now sits above the fort. 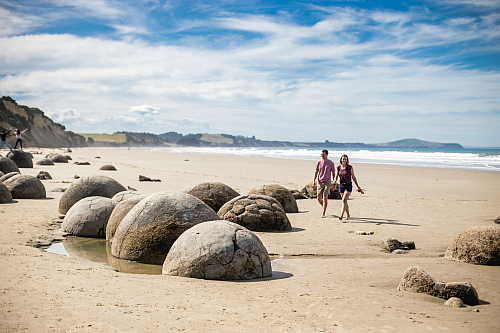 * Dunedin is the Celtic form of Edinburgh. The original design of the city was based on Edinburgh, but was amended to cater for local terrain, including the world's steepest street, Baldwin street (if you have the chance, take a drive to the top. You will not believe the gradient).

For more information on Dunedin Otago click here to go to the Tourism New Zealand site. 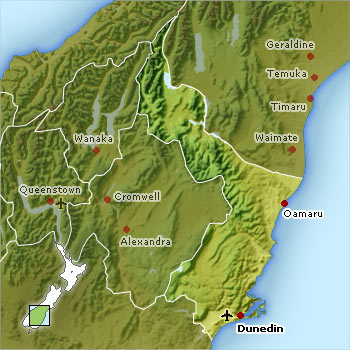