Waikato New Zealand is a prosperous farming region on the banks of the mighty Waikato river.

Here, rolling pastures and farmlands conceal a subterranean wonderland of limestone caves which attract thousands of visitors to the region every year. 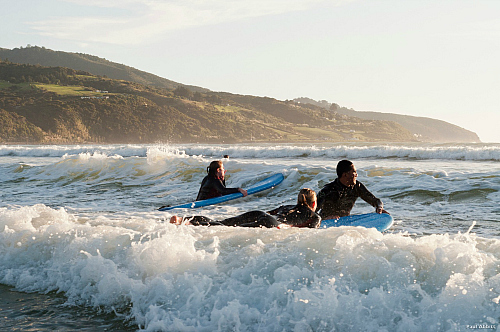 Hamilton, located between Auckland and Rotorua , is the region's largest city, and is New Zealand's 4th largest urban area.

Hamilton itself has a population of over 150,000 people.

This thriving, vibrant university city, sits on the banks of the roaring Waikato river, and is home to many sporting and agricultural events.  Perhaps the most notable are the Hamilton V8 motorsport races and the annual Field days , which are reputed to be the largest agricultural show in the Southern Hemisphere.

The region is also home to the Super Rugby team, the Waikato Chiefs

Raglan, a lovely coastal town has a laid back feel, and is home to one of New Zealand's most famous surf beaches. An easy 45 minutes west of Hamilton, Raglan's black sand beaches and famous left hand break at Manu Bay, attract surfers from all over the world.

There's lots of great information on this page about the Waikato, so to help you find what you are looking for, we've added some links that lead to the various topics on this page.

Just click on the links below to go directly to your chosen topic.

When you finish just click your browsers "back" button and you will return here.

If you are traveling to Hamilton by road, Hamilton is around one and a half hours drive South of Auckland, via State Highway 1. 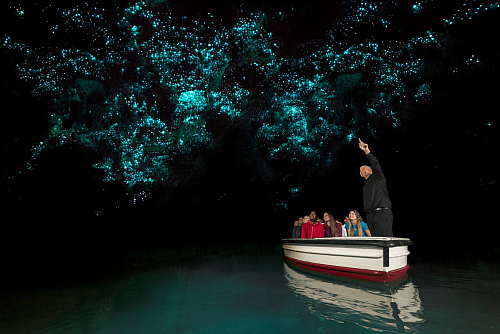 From Wellington, it's around six hours drive to Hamilton via SH1 (see our State Highways map).

You can find out more on their website here.

From Hamilton to the Waitomo Caves is around one hours drive via State Highway 39.

Just like in the rest of New Zealand, there is so much to see and do in the Waikato, that it can be confusing wondering where to go and how to spend your hard earned money.

Based on our own experiences, and those of our customers, here are our top two Waikato activities.

A visit to Waitomo Caves is a must

The famous Waitomo Caves are a must see if you are in the region. 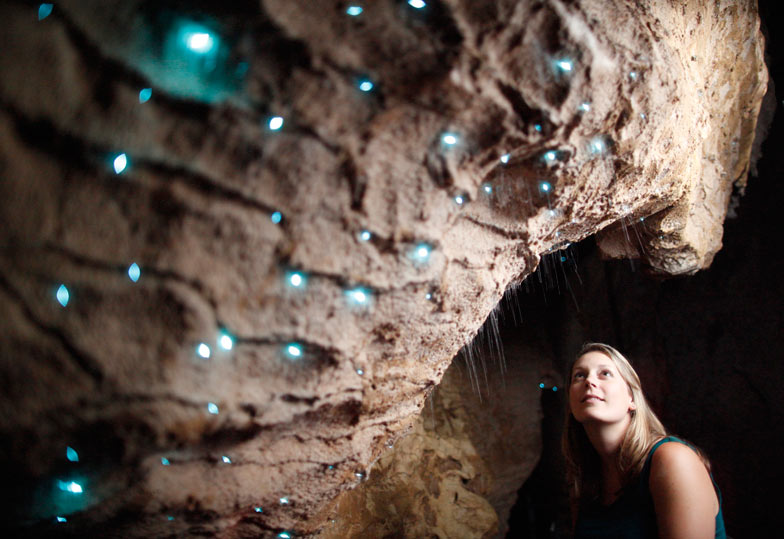 Formed over millions of years, the caves are stunning, and apart from their range of amazing subterranean formations, they are also home to the Waitomo glowworms.

There are various tours available, from "mild" to "wild".

On the "mild" side, why not take a guided walk or a cruise through the caves?

For something "wild", black water rafting is sure to heighten your senses.

Not sure which would suit you?

Why not read what other visitors had to say.

You can see their comments and check out the full range of tours by clicking on the button below:

Visit Hobbiton and see where the legend was born

No visit to the Waikato would be complete without a visit to Hobbiton. 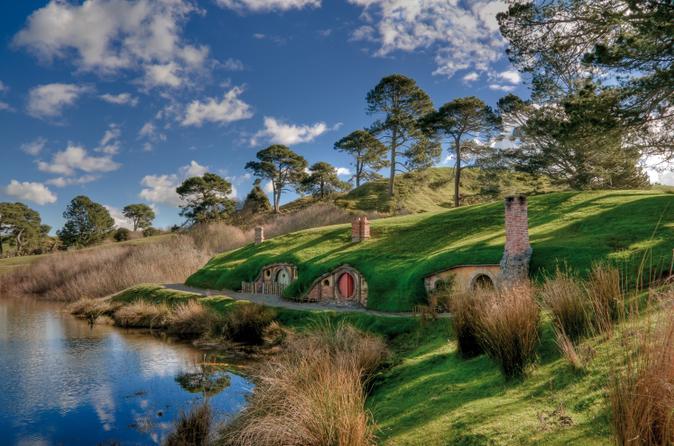 If you are a Lord of the Rings fan, this is something that you have to see.

Experience the wonders of Middle-earth and the Shire!

Visit the movie set and see how this stunning working sheep farm was transformed into a magical place that has wowed millions of movie goers from around the world.

Imagine having your picture taken in front of the Hobbit holes!

There's a wide range of highly rated tours available, with something to suit you.

You can see what others thought, and check out the full range of tours by clicking on the button below:

There's a huge range of accommodation in the Waikato with everything from camping grounds to five star luxury hotels and lodges. 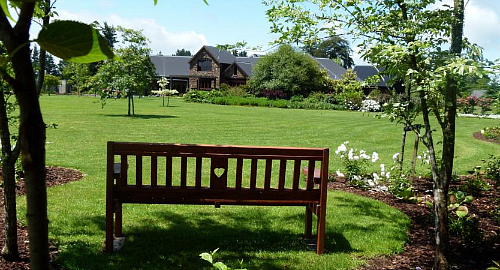 You can read reviews, search for accommodation, and make bookings by clicking on the links below:

* to see accommodation near the Waitomo Caves click here.

* to see hotels in the surf mecca of Raglan click here.

The Waikato region is culturally and historically significant to both Maori and Pakeha (European New Zealanders).

Many local Maori people can trace their heritage back to the Tainui canoe which arrived in New Zealand about 800 years ago. The region was the site of many Maori pa (a fortified village) and was an important centre of early Maori commerce. 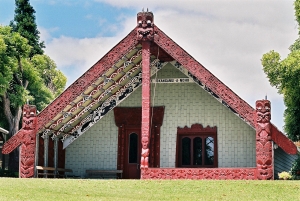 The region was the scene of many fierce tribal battles, which escalated in the early 1800s with the availability of european muskets and weapons.

As more and more european settlers arrived through the mid 1800s, the local Maori tribes united to appoint their own king, Patatau Te Wherowhero, whose descendants continue to assume the role of king or queen.

The settlement of Ngaruawahia is one of the region's oldest, and is significant to Maori people. Located on the banks of the Waikato river at Ngaruawahia, the Turangawaewae marae is the official residence of the reigning Maori monarch, Te Arikuni Tuheita Paki. Crowned in 2006, he succeeded his late mother, Dame Te Atairangikaahu, who had reigned for 40 years.

Nearby Mount Taupiri has special importance to Maori, as the burial site of past Maori kings and the Queen.

If you visit Waikato New Zealand in March, make a point of visiting the tiny seaside town of Kawhia. The annual Maori Food Festival attracts thousands and is a wonderful showcase of Maori cuisine and culture.

A mixture of landscapes ensures a wide variety of activities for those attracted to the outdoors. Bays and beaches, rolling hills, raging rivers and underground caverns attract thousands to the region every year. 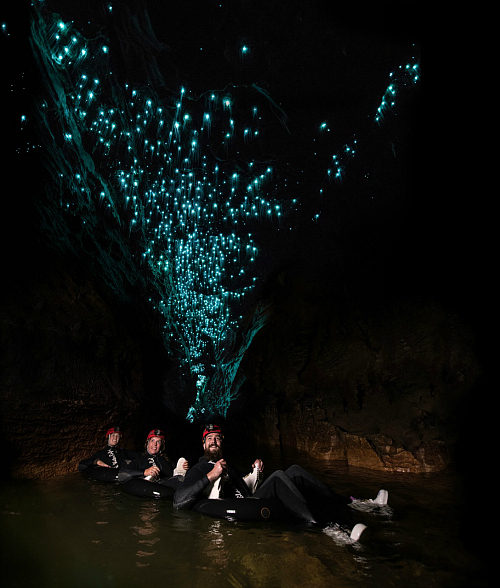 Perhaps Waikato New Zealand's most significant attraction, Waitomo caves are an ancient network of limestone caves containing stalactites, stalagmites, deep caverns, and streams. And to top it all off, millions of tiny glow worms bathe the caverns in an eerie, peaceful light. The Maori name "Waitomo" is derived from "wai" meaning water, and "tomo" meaning hole.

For the adventurous, this amazing complex features overnight caving expeditions, black water rafting, abseiling, and climbing tours. The caves feature the county's highest cave abseil which drops around 100 metres into a feature known as the "Lost World".

Waitomo Caves are one of New Zealand's oldest and most popular tourist attractions, and a "must see" if you are in the region.

The Mount Pirongia forest has a network of walking tracks which feature a wide variety of New Zealand flora and fauna. 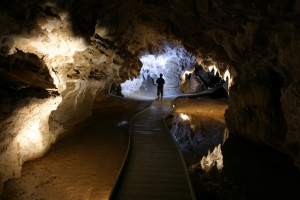 From low altitude forests and ferns, to alpine plants on the exposed peaks, the forest is a haven for New Zealand birds.

The beautiful Hamilton Gardens are another very popular attraction. Covering 58 hectares, the gardens feature a selection of theme based sections featuring plants and styles from around the globe.

The area around Kawhia harbour is well known for its beaches and fishing. At Ocean beach, the Te Puia springs are a popular spot where you can dig your own bubbling spa in the black sand. Hot springs bring water to the surface for a relaxing, invigorating experience. 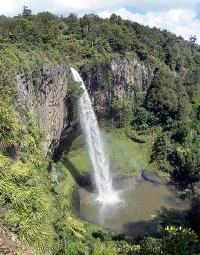 The mighty Waikato river is a major supply source for the country's hydro elect power supply.

But it's also a fly fishing paradise. Local trout are legendary and guided fishing tours are available.

The Waikato is also a perfect waterway for a leisurely boat trip, or for the thrill seeker, a roaring jetboat ride.

For Lord of the Rings fans, Matamata is home to Hobbiton, the hobbit village. And the Hobbiton set will be further developed for The Hobbit movie.

Another popular attraction in the region is Bridal Veil Falls . Located near Raglan, the falls drop 55 metres into a pool surrounded by lush vegetation. There are two viewing platforms at the top of the falls, and a track takes you to the bottom of the falls for the best photos.

* Hobbits once roamed the hills at Hobbiton, near Matamata, where the Lord of the Rings film trilogy was filmed (true :)).

Check out these amazing videos 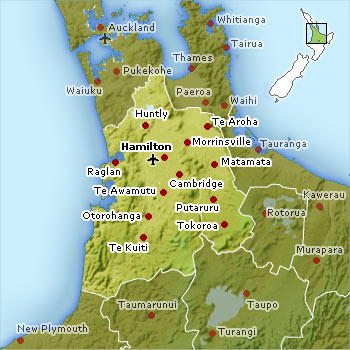