Central Otago flourished during the 1800's when thousands of settlers poured into the region looking to make their fortune from gold. These days however, the region is characterised by its wide open spaces, crisp clear air, and sparse population. 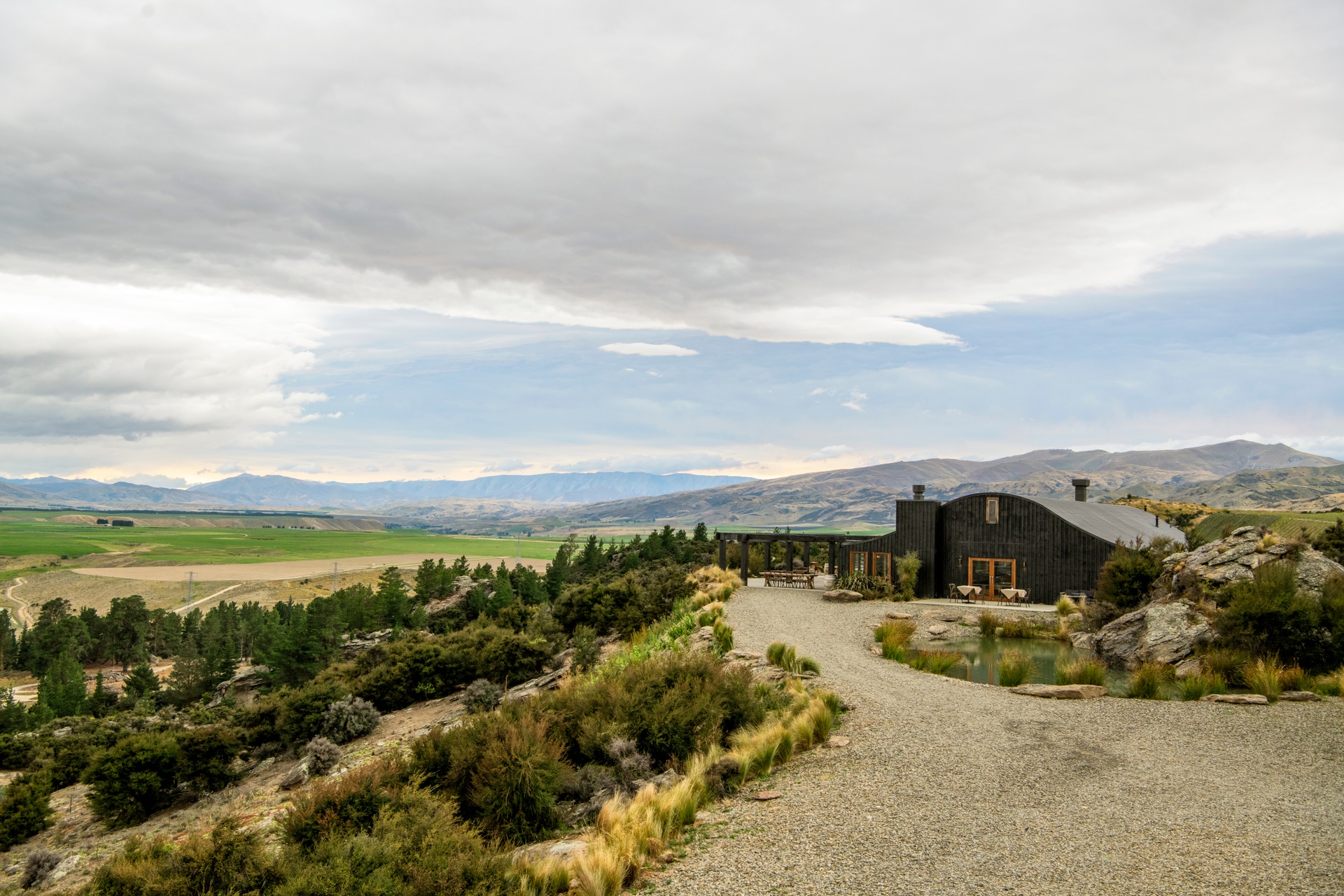 Central Otago is made up of five main areas, each with its own special features and attractions: Cromwell and Alexandra (the two largest), Manuherikia, Roxburgh and Maniototo.

Further from the sea than anywhere else in New Zealand, the region has New Zealand's hottest, coldest and driest climate.

With one of New Zealand's lowest population densities of only 1.7 people per square kilometre, the region's beautiful golden landscape is relatively unaffected by human activity, and the laid back environment encourages visitors to explore historic gold mining sites and award winning vineyards.

Gold medal pinot noir wines are now the region's number one claim to fame, and a Central Otago wine tour is the perfect way to sample the local produce.


Getting to Central Otago

Central Otago is nestled in the central southern part of the South Island.

It's bordered on the east by Coastal Otago, to the south by Southland, to the north by Canterbury, and to the west by the Southern Lakes.

If you are driving from Christchurch, it's around 6 hours drive to Cromwell, via State Highways 1, then 8.

Central Otago is easily accessible from major airports located in the adjoining regions at Queenstown and Dunedin .

Find the best deal, compare prices, and read what other travelers have to say about hotels in Cromwell.

Maori visited the region on their way to collect pounamu (greenstone or nephrite jade) from the rivers on the west coast. They also came on hunting trips, and built rafts to use on the Clutha river for transporting moa (now extinct giant birds) and other game back to the east coast. 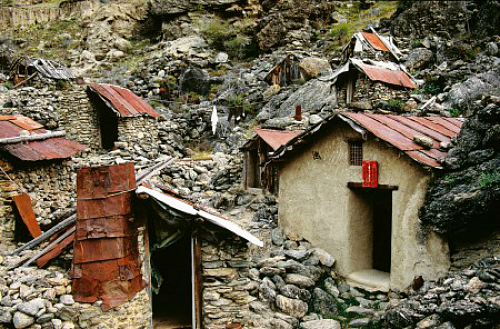 They called the river Mata-au, which means 'surfaced current', and according to legend, a giant named Kopuwai and his pack of two-headed dogs lived above the Mata-au on the Old Man range behind Alexandra. Old Man range is also known as Kopuwai.

Gold was discovered at Gabriel's Gully in 1861, and brought the first influx of Europeans to the area. The gold rush spread quickly and created boom towns and a flush of activity. Relics of Otago's pioneering and gold mining past are found at historic sites throughout the region.

Food and Wine in Central Otago

This small wine region has a growing international reputation for pinot noir. About 70 percent of vineyards grow pinot noir, producing wine that is renowned for a vibrant, spicy flavour and velvety texture. Chardonnay, sauvignon blanc, riesling, pinot gris, and gewürztraminer make up the remaining 30 percent.

Wine tours and wine trails take visitors to vineyards and wineries, and around one of New Zealand's most scenic wine regions.

Experience some of the region's best food and wine 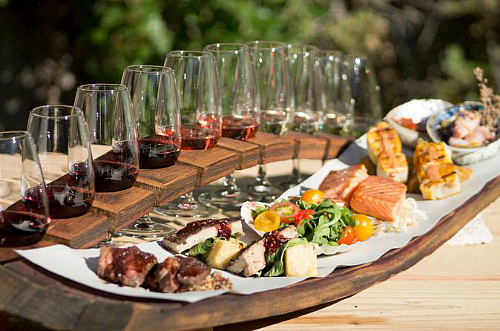 The half day food and wine pairing tour, takes you to three local boutique wineries to sample some of the best that the region has to offer.

The rugged Kawarau Gorge offers up the Wild Earth Restaurant where you will sample five dishes, matched to five superb wines.

After that two more wineries await, before you are finally returned to your hotel.

Learn more by clicking on the following button:

Cromwell has a New Zealand-first interactive wine activity. 'The Big Picture' wine experience, is a comprehensive wine experience with wine tasting, an aroma room and a 'virtual flight' over the region's vineyards. 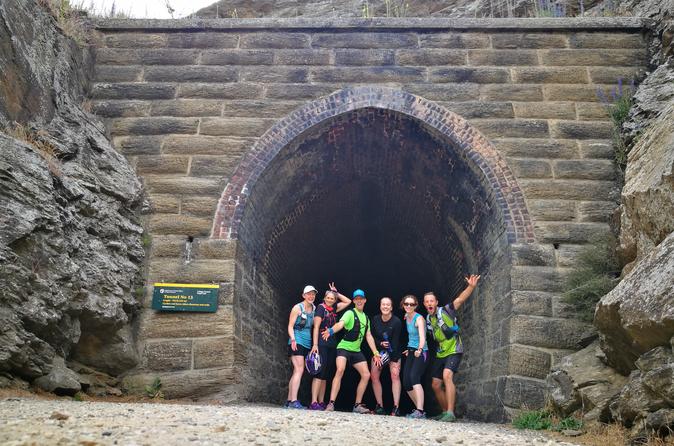 The route, along an old railway line, has no steep hills and many welcoming stop-offs where cyclists can soak in southern hospitality and scenery.

Naseby - New Zealand's ice sports hub - has the southern hemisphere's only Olympic-standard curling facility and natural luge track. Visitors can learn how to curl with a 60-minute 'have-a-go' session, or play a full two-hour game.

The 360m natural luge track can produce speeds of up to 70kph, but caters for all levels of thrill-seekers.

And thrill seekers should take a ride on the Goldfields jetboat, in the Kawarau Gorge near Cromwell.

Central Otago is a year-round destination and has four distinct seasons, and a landscape that goes through the dramatic seasonal changes produced by New Zealand's hottest and coldest temperatures.

The early Scottish immigrants introduced the sport of curling to the region's frozen natural ponds and miners' dams, and traditions associated with curling have become part of Central Otago culture. There are outdoor curling rinks in Alexandra and on the Maniototo Plains, as well as Naseby's year-round Olympic-standard indoor ice rink.

There's lots to do here

Here are a few ideas:

* Visit a vineyard. Guided tours are available. Relax and let someone else worry about the driving.

* Old Cromwell Town - in 1993 the old town was flooded with the creation of the Clyde Dam. Prior to the flooding, several historic building were dismantled and then reassembled on a site overlooking the dam. Today you can wander around these historic buildings and get a feel for what life was like in the 1800's. 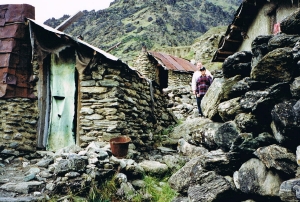 * Walk, cycle or horse ride the Central Otago Rail Trail. This 150 kilometre long stretch of the old Clyde to Middlemarch railway line is now a popular attraction for people wanting to experience the Central Otago landscape. The trail is in six sections, and passes through tunnels and over viaducts. Perhaps the most popular section is from Lauder to Oturehua, covering 23 kilometres, and passing through several tunnels and a long bridge over the Manuherikia River. Click the following link to visit the official site for the Rail Trail.

* The Goldfields Mining Centre, located on Kawarau Gorge near Cromwell, is a historic gold mining site protected by the Department of Conservation. This is a great place for all the family (you can even pan for gold) and is a real eye opener, showing how tough it must have been for the early settlers. You will see mine shafts and tunnels, the stamper battery used to crush rock, and the chinese village, home to the original chinese miners.

Click on the following link for more information on the Goldfields Mining Centre .

* The Highlands Motorsport Park near Cromwell is home to several tracks, and also houses the National Motorsport Museum. The complex offers speed fans the opportunity to hire go carts, or to kit out in full race gear and take a hot lap in a race prepared car. The kids are also catered for with a mini golf course and pedal cars.

* The nearby tourist towns of Queenstown and Wanaka are both stunningly beautiful lakeside retreats and have a huge range of activities and attractions. Do yourself a favour and spend some time in each. You won't regret it.

* This is New Zealand's most inland region.

* It is the hottest, coldest and driest part of New Zealand.

* Clutha river was named after the Clyde river, in Scotland. Clutha is Gaelic for Clyde.

* It is the world's southern-most wine production area.

For more helpful information on the Central Otago region, click here to go to the Tourism New Zealand web site. 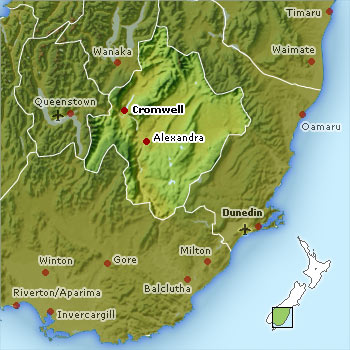