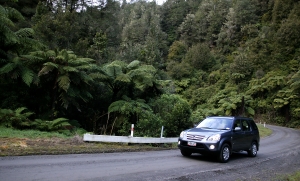 The Forgotten World Highway (also known as State Highway 43) rises and falls over a distance of 150 kilometres, and can be accessed from either Taumarunui or Stratford, and takes visitors through lush native forests, alongside steep river gorges, and over four mountain saddles. 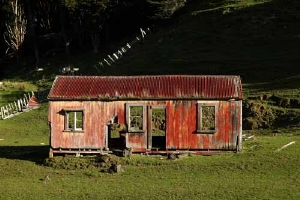 "Forgotten" may be its name, but the highway is a link to times gone by.

As you make your way along the highway there are constant reminders of the region's past, and particularly of the struggle for many of the area's pioneering people.

Towards Stratford a turnoff takes you to the strangely named Bridge to Somewhere. "Somewhere" is not actually a place, and the name is in response to the Bridge to Nowhere, in the Whanganui National Park.

The small settlement of Whangamomona boomed in the early part of the 20th century, but the huge floods of 1924 decimated the area. 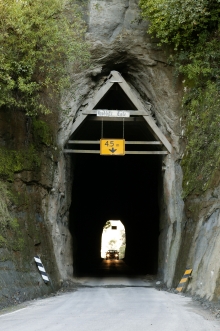 Remnants of a coal mine, an old flour mill, and several river boat moorings are other links to days of old.

The Nukunuku Museum reveals what life was really like for the pioneers with various artefacts and displays.

The highway will also delight those of you looking for amazing scenery.

Tongariro National Park's three volcanoes are visible from the top of the Strathmore Saddle (looking to the east), and to the west, you can see the snow capped peak of Mount Taranaki.

The Whangamomona Saddle has glorious views of native podocarp and beech forest.

And as a side trip, there is a great three hour walk beginning here.

From the Tahora Saddle you can also see the distant volcanoes. And hilltops to the east and west bear the remains of ancient Maori Pa sites.

Mount Damper Falls, one of the tallest in the North Island, at 85 metres, is accessed from the Moki Forest Road. 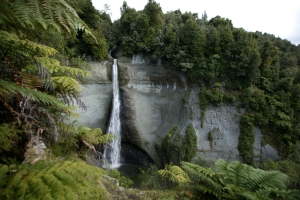 Other features well worth seeing are the 180 metre long Moki Tunnel, dating back to the 1930s, and the niu poles at the Maraekowhai Reserve.

The Hauhau warriors built the war pole, Rongo niu, in 1864 to protect them from the european's musket fire.

When the conflict ended, the peace pole, Rere kore was constructed.

If you are in the Taranaki region, the Forgotten World Highway should be high on your list of things to do. 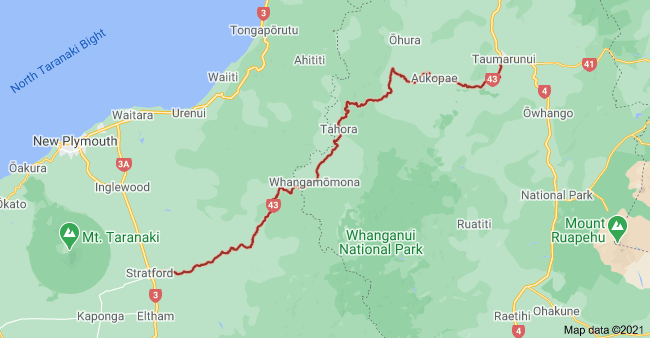