You have to try the Kawarau Bridge Bungy!


The original (and the best?)

The Kawarau Bridge bungy is the original bungy site, and home to the world's first commercial bungy.

Started by the legendary AJ Hackett more than a quarter of a century ago, it remains Queenstown's most popular bungy site. 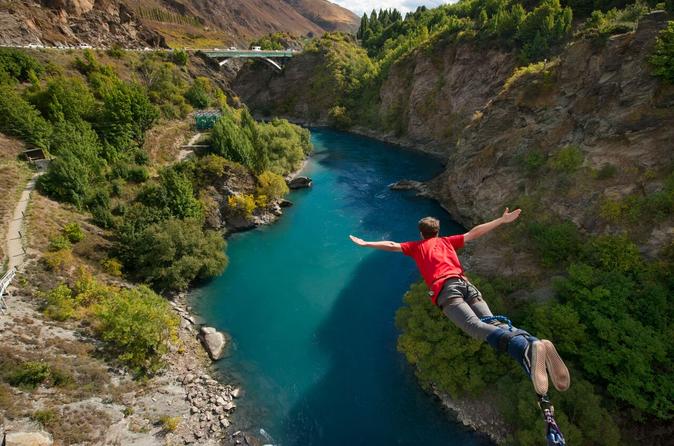 It's one of those iconic Queenstown attractions, and draws tens of thousands of people from around the world each year, all looking to conquer their bungy fear (or, to jump again).

Located about 30 minutes drive outside Queenstown on Kawarau Gorge, the Kawarau Bungy Center is an awe-inspiring activity hub, that also houses the Kawarau Zipride, the Bungy Shop, a cafe, and a conference center.

Well, you can scroll down to the video, or read on for our personal account of what it was like.

The Kawarau bridge was the site for our first bungy jump, a day filled with trepidation, anticipation, then an exhilarating rush.

Yep, that's what bungy does to you.

It awakens your senses, makes you question your own courage, and then, when you jump it raises your adrenalin to a new level.

We began our "preparation" a few days before our jump, by heading out to the jump site to watch other poor souls throwing themselves off the bridge!

Each participant is encouraged by a group of spectators (many of whom have no intention of ever jumping) who watch from the observation deck, and clap and cheer vigorously as each jumper "departs". 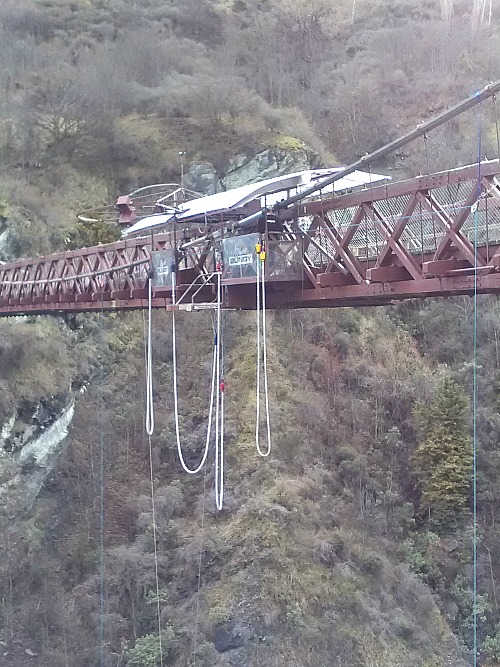 Caught up in the moment and the excitement, we convinced ourselves that we would be back the next day to "just do it".

And that's how it turned out.

We paid our money and made our way onto the bridge.

As you sit in the special preparation area, the butterflies dance around in your stomach. As the jump master secures the bungy cord to your legs you realize that your time is fast approaching.

Then, you stand up and shuffle over to the edge of the platform.

At this point you may well wonder "what the heck am I doing here!".

Then, your bungy crew member tells you to look upstream at another bridge and "just do a huge swan dive towards it".

At this point there's no turning back. You can of course refuse to jump, but if you do, there are no refunds. And with an audience watching, the satisfaction of jumping to the cheers of onlookers is something to remember.

And that's just what we did!

Within a couple of seconds the cord was at full extension, so you soon find yourself heading back up towards the platform. At around this time you realize that "all is good" and as you hang upside down you have time to draw a breath and take in the thrill of what has just happened.

Before long the crew in a small inflatable boat pass a piece of pipe up to you. As you hold on they pull you down into the boat, release the cord, and take you back to shore.

You raise your arms in triumph, to the cheers of your audience.

At Kawarau Bridge bungy the walk back up from the river is a bit of a hike, but with the adrenalin pumping, you feel like you could scale a mountain. 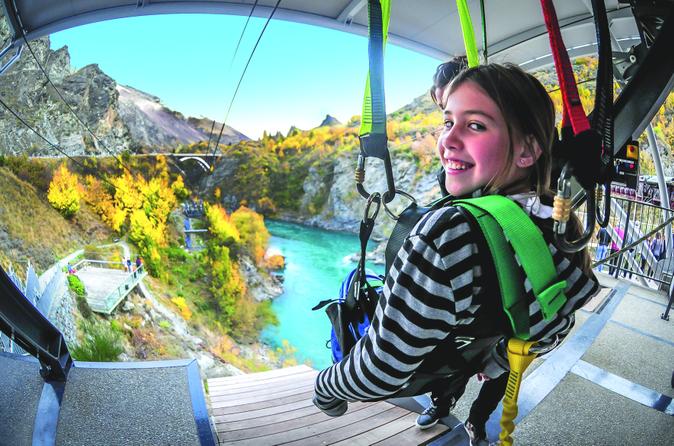 If you are looking for a "rush" but can't stand the thought of jumping off the bridge, the Kawarau Zipride might be for you.

Located alongside the Kawarau Bridge bungy, the Zipride is ideal for small groups, families, or tour parties.

Consisting of 3 x 130 meter long zip lines, the Zipride can take up to six people at a time. At speeds up to 60 kilometers per hour, there is  no shortage of thrills as you race down the line.

Read reviews and make your bookings by clicking on the button below:

Are there other bungy sites in Queenstown?

Not content with just the original site, AJ Hackett have developed several more bungy sites in and around Queenstown.

The Skyline Gondola complex is home to the "Ledge" bungy and swing. Can you picture yourself jumping (or swinging) off a platform perched 400 meters above Queenstown!

Check out the video at the bottom of the page.

Around 45 minutes out of Queenstown, the Nevis Bungy, at 134 meters, is New Zealand's highest. And the Nevis Swing, is the world's highest swing!

Read reviews and learn more by clicking on the buttons below:


© Copyright 2009 and until revoked by New-Zealand-Travel-Showcase.com - refer to our notice under the "US" tab