Whale Watch Kaikoura are the specialist tour provider for whale watching in Kaikoura. 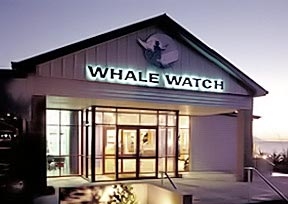 If you are staying in Kaikoura, you can view and book your Whale Watch tour HERE.

Kaikoura is a stunning seaside township, located on the east coast of New Zealand's South Island, around two and a half hours drive north of Christchurch. 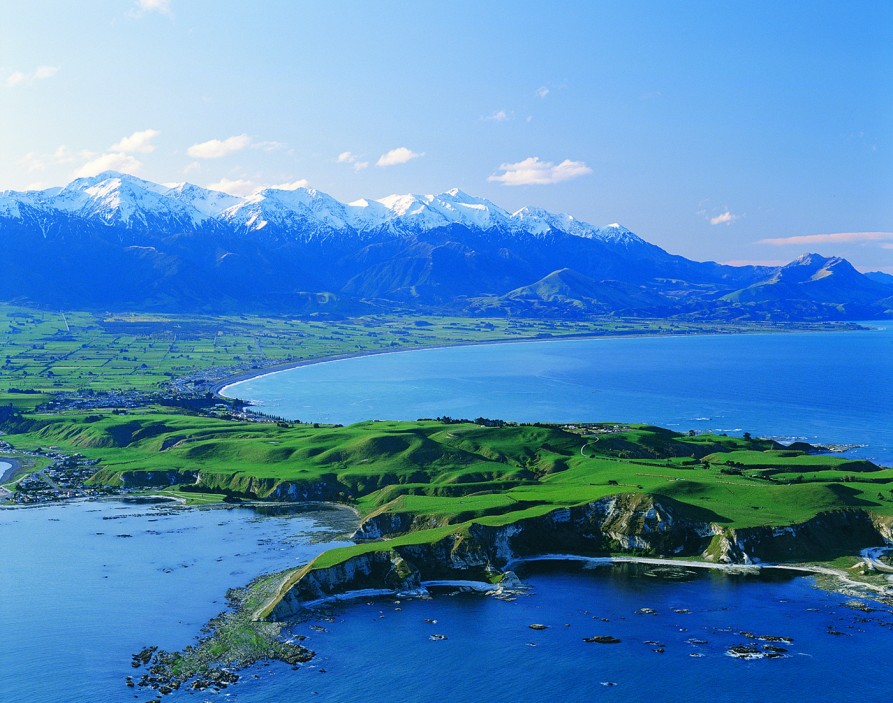 Here, where the mountains meet the sea, conditions are perfect for a wide range of marine life.

Just offshore, in the 2 kilometre deep Kaikoura Canyon, two strong currents converge and push a rich supply of nutrients towards the surface, creating a paradise for whales, dolphins, New Zealand fur seals, and a variety of other animals.

And of course, this makes Kaikoura the ideal year round destination for you to view these amazing animals.

We did the tour several years ago, and it remains one of the best experiences that we have had in New Zealand.

And the town of Kaikoura remains one of our favourite New Zealand destinations.

Who Are Whale Watch Kaikoura?

Whale Watch, owned and operated by the indigenous Kati Kuri people of Kaikoura, are an award winning nature tourism company, operating out of

speciality premises in Kaikoura. Since 1987 they have introduced tens of thousands of people to the marine wonders of this beautiful location.

Their fleet now includes several purpose built catamarans, each with viewing decks, and highly skilled staff, who will ensure your experience is one to remember.

For your peace of mind, they are a Qualmark endorsed visitor activity, meaning that they have had to achieve and maintain high operating standards.

But What Will I See On A Whale Watch Kaikoura Tour?

Your Whale Watch Kaikoura tour will be a unique experience. 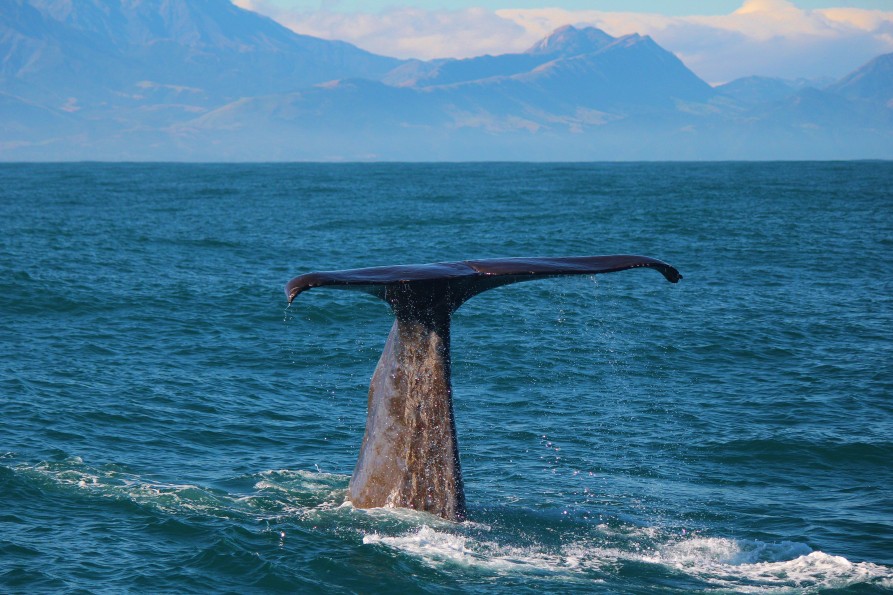 Of course sightings vary on every trip, but so confident are the team at Whale Watch Kaikoura, that they will refund 80% of your fare if you don't see a whale!

Whales use clicking sounds to communicate, and your crew use a hydrophone to listen for the clicks, allowing them to pinpoint the whale's location. Amazing! And the crew also enlist your assistance to find the whales. You are encouraged to keep a lookout for the telltale spouts as the whales surface. As soon as a passenger yells "there's one", your skipper turns the boat and dashes off towards the whale (after making sure that everyone is seated of course!). It's a simple but effective method, and really adds to your involvement and enjoyment.

The stars of your trip are the Giant Sperm Whales, who reside permanently

off Kaikoura. We've included some pictures of our cheeky "regulars".

You may also see Dusky dolphins, Hector's dolphins, New Zealand Fur Seals, penguins, Orca, and Albatross, as well as many other species of birdlife.

And depending on the time of year you may also encounter Humpback Whales, Blue Whales, Pilot Whales and Southern Right Whales, during their migration.

Giant Sperm Whales live for over 60 years. At lengths over 18 metres, and weights exceeding 57 tonnes, they are the largest of the toothed whales, and also the world's biggest predator.

This amazing mammal can dive to depths of up to 3 kilometres and can remain submerged for up to two hours. Prey includes the Giant Squid and it is common for Sperm Whales to wear scars from encounters.

A Sperm Whales head contains a white waxy oil which early whalers thought was sperm (hence the name). Scientists believe that the oil helps to magnify the whales clicks, used for communication and echo location when hunting.

Sperm Whales can be seen throughout the year off Kaikoura. An abundance of food ensures that they have no reason to leave.

At over 200 tonnes in weight and over 33 metres in length, they are the largest and heaviest animal that has ever lived on our planet. With a heart as large as a small car, and a tongue as big as an elephant, theses are formidable mammals. They can live for more than 70 years.

Their whistle can be heard underwater across entire oceans. Their blow can be over 9 metres high, forming a cloud that floats long after the whale has dived.

Of course something so large will have a massive appetite. Blue Whales need to eat over 4.5 tons of krill a day, and feed round the clock. Their skin gives off a stunning blue glow under water.

It is thought that less than 2,000 Blue Whales remain in the Southern Hemisphere today. Fortunately Blue Whales still visit Kaikoura.

Seen in Kaikoura during winter months on their migration from the Antarctic to the tropics to give birth, Humpback Whales can weigh 40 tonnes and measure 15 metres in length. They can live to over 50 years of age.

Humpbacks are often seen performing tricks such as flipper slapping and breaching, and are great fun to watch.

Their name comes from their swimming and diving style which displays their large humped back and relatively small dorsal fin.

This small (10 metres in length) whale is an occasional visitor to the waters off Kaikoura. Unfortunately, the Minke is still hunted by Japanese whaling fleets.

At a little over 3 metres in length, and weighing around 400kg, Pygmy Sperm Whales closely resemble their cousins, the Giant Sperm Whales. Their large head also contains white oil and their short narrow mouth has a toothless top jaw. They dine on fish, cuttlefish and shrimps.

A peculiar trait is their ability to release a squid-like cloud of mist when startled, allowing escape from predators.

At 80 tonnes and 17 metres in length, this rare baleen whale still visits Kaikoura occasionally. They have been hunted to near extiction due to their rich oil supply. This, and their buoyancy when harpooned, led to them being known as the 'right' whale to kill.

These small (7 metres in length) slender mammals are occasional visitors to the waters off Kaikoura. Male adults grow large curved tusks which protrude from the lower jaw, eventually growing so long that they prevent the mouth from fully opening. 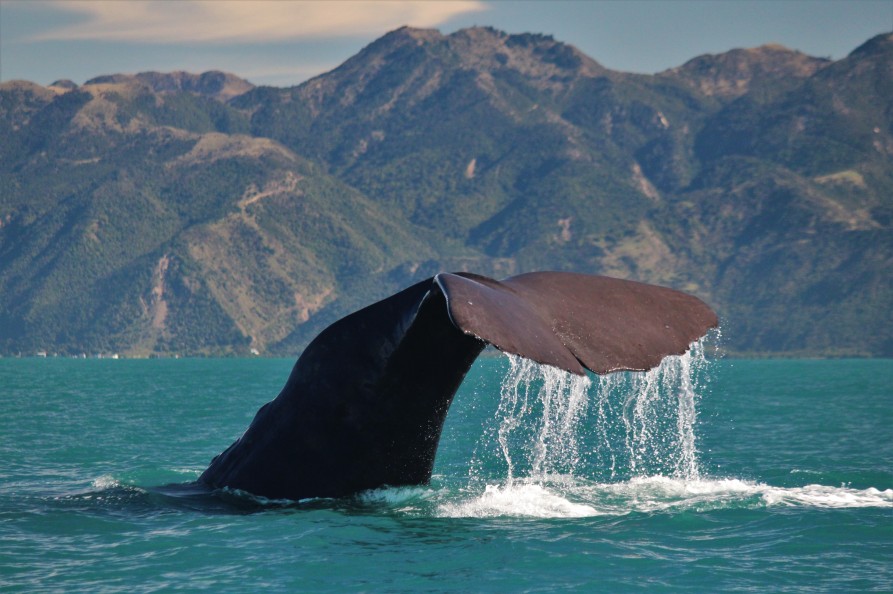 Common Dolphins are often seen in large numbers off Kaikoura. They grow to 2.5 metres in length and often frolic in the bow wave of the Whale Watch Kaikoura vessels.

Seen off the Kaikoura Coast in huge pods of up to 1,000 dolphins. 3 metres in length and around 100 kg

Hectors Dolphin is the world's smallest and rarest, although often seen close to the Kaikoura shore in small family groups.

Its survival is threatened by coastal run off and fishing nets. This beautiful little dolphin can live for 20 years and measures only 1.5 metres in length. Officially classified as endangered.

Although referred to as a whale, the Orca is in fact the largest species of dolphin. Family pods are often seen hunting seals and dolphins, which they persue vigorously. They will attack and kill any species of whale, regardless of size, and have a preference for the tongue.

However, a recently discovered sub-species eats only fish, and has actually been spotted under attack from biting seals and dolphins. Orca grow to 10 metres in length.

Living in pods of up to 60, they sometimes gather in their hundreds in the waters off Kaikoura. Feeding at great depths on squid, these inquisitive whales will often approach Whale Watch Kaikoura vessels for a closer look. They can reach lengths of almost 7 metres.

Only occasionally seen off Kaikoura, this dolphin is more common in other parts of Australasia.

Small and thickset, this acrobatic dolphin is regularly seen on Whale Watch Kaikoura tours, where they can be seen jumping from the sea in spectacular displays.

New Zealand Fur seals can be seen at several locations along the highway near Kaikoura.

Fur seals and their pups can often be seen at the Point Keen seal rookery, close to Kaikoura township.

A wide variety of seabirds inhabit the Kaikoura coastline. 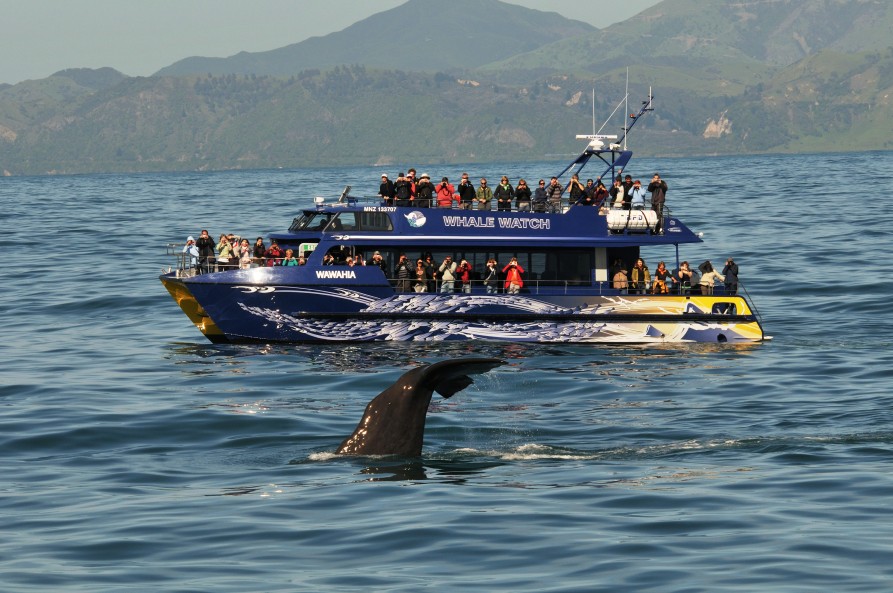 Their modern catamarans are fitted with special engines that have lower underwater noise levels than normal engines, so as to have minimal impact on local marine life. And the vessels are fitted with non-polluting toilets to protect the environment.

The passenger cabins have been fully enclosed, have comfortable seating, air conditioning and large plasma screens for you to view award winning marine life animations.

For your comfort, passenger numbers are kept well below the vessels capacity.

Are You Staying In Kaikoura?

If so, you can book your tour here. Click on the following link to view or book your Whale Watch Kaikoura tour.