The New Zealand Maori people are the indigenous people of Aotearoa (New Zealand) and first arrived over 1000 years ago, travelling from their ancestral homeland of Hawaiki in small ocean going canoes (waka).

Today, New Zealand Maori people account for around 14% of the national population, and their culture and language have an enormous impact on every day life in New Zealand.

Where It All Started-The Creation Of New Zealand

According to Maori tradition, New Zealand was created by the god Maui. Maori legend has it that Maui, while fishing, hooked up the North Island (known as Te Ika a Maui, or the fish of Maui). Maori describe the South Island as Maui's waka (canoe) and Stewart Island (known as Rakiura) as Maui's punga (anchor). The New Zealand Maori believe the far north of the North Island to be the tail of the fish, and Wellington Harbour the mouth.

The culture of the New Zealand Maori people is varied and unique, and is expressed in many ways, such as arts, weaving, tattoo (moko), carving (here is a short video that talks about greenstone carvings),

and group performances. Today, New Zealand Maori people reproduce many of the techniques used for centuries by their ancestors (tipuna), but also use many modern forms of expression such as film and television, theatre, and even hip hop music.

How Do You Pronounce Those Names??

So, for example, the location Whakatane, is pronounced "fa-ca-ta-ne".

Tena koutou-Greetings to you all

To learn more about some common Maori words and phrases and to hear them, the following link will take you to the New Zealand Government website, NZ History. 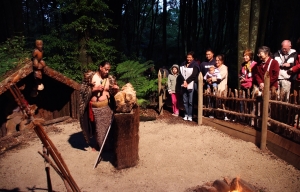 The formal welcome is known as a powhiri. The powhiri begins with a wero (challenge) by a warrior from the tangata whenua (hosts), to the manuhiri (guests). The warrior may carry a taiaha (spear), and will then lay down a token (often a small branch) that the manuhiri will pick up to show that they come in peace. Some kuia (women) from the hosts will perform a karanga (call/chant) to the guests. Women from the manuhiri will then respond as they move onto the marae in front of their men.

Once inside the wharenui (meeting house) on the marae, mihimihi (greetings) and whaikorero (speeches) are made. Waiata (songs) may also be sung. It is also normal for the manuhiri (guests) to present a koha (gift) to the tangata whenua after greeting the hosts with a hongi-the ceremonial touching of noses. After the powhiri, kai (food) may be shared.

Click here to read your free 18 page booklet "Introduction To Maori Culture" in your browser, or right-click to download it.

Our thanks to newzealand.com for some of the information and photos on the New Zealand Maori people.