Here's a quick guide to New Zealand's airports and the airlines that fly into, and around, the country.

This is a broad guide to the airlines that fly to New Zealand. Some of the airlines code share, a practice that allows them to share each other’s aircraft. We recommend you contact the airlines directly for detailed information about flights.

Flying between towns and cities in New Zealand is easy. Our two major domestic carriers are:

New Zealand has a comprehensive network of international and domestic airports. 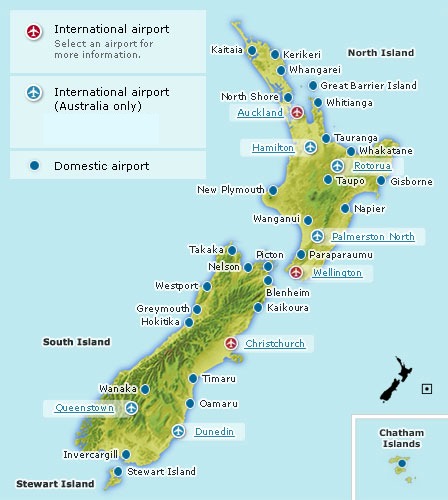 Auckland International Airport is located about 20 kilometres south of the city centre in the suburb of Mangere.

New Zealand’s largest and busiest airport has one terminal building for international flights and another for domestic flights.

Christchurch International Airport is located about 12 kilometres northwest of the city centre. It is the South Island’s largest and busiest airport.

International flights operate directly to and from four Australian destinations - Brisbane, Gold Coast, Sydney and Melbourne - as well as Fiji and Singapore. Tokyo has direct flights to Christchurch from late October to February.

Domestic flights are operated by Air New Zealand and Jetstar.

Dunedin International Airport is located at Momona, about 30 kilometres south of the City Centre.

International flights are operated by Virgin Australia and Air New Zealand (sometimes these airlines code share on each others flights) between Dunedin and three Australian destinations - Brisbane, Melbourne and Sydney.

Domestic flights to and from Dunedin are operated by Air New Zealand and Jetstar, with many other airlines offering services to Dunedin on a code share basis.

Hamilton International Airport is located about 15 kilometres south of the city centre.

Domestic flights to and from Hamilton are operated by Air New Zealand and Sunair.

Queenstown Airport is located close to the town centre, in the suburb of Frankton.

Domestic flights are operated by Air New Zealand and Jetstar.

Wellington International Airport is located eight kilometres southeast of downtown Wellington in the suburb of Rongotai.

International flights operate to and from four Australian destinations - Brisbane, Gold Coast, Sydney and Melbourne - as well as Fiji.

Shuttle buses operate to and from all New Zealand international airports and most domestic airports.

With airport shuttles, you can be picked up or dropped off at your accommodation, or in the central business district of your destination. Many transport companies are flexible and can take you to a private address, if you’re staying with friends.

An airport shuttle is generally cheaper than taking a taxi if you’re on your own or travelling with just one other person. However you can expect a longer journey because the shuttle may make a number of stops along the way. When you book your shuttle ride, ensure that the company is aware of your check-in time. Journey times also depend on traffic conditions.

If you’re looking for an even cheaper option for airport transfers, check out the local bus services.

Don't Get Caught Out - Book Your Airport Shuttle Before Flying